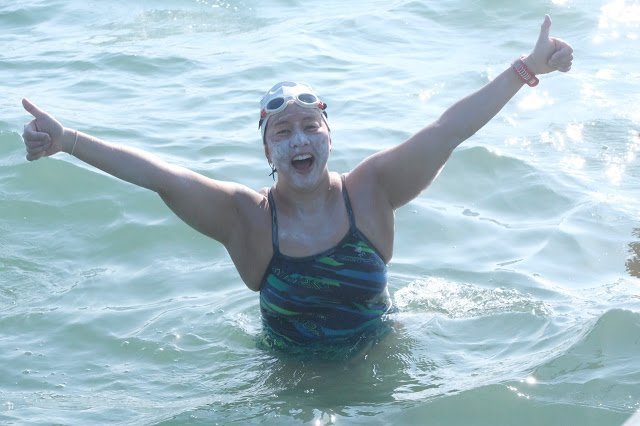 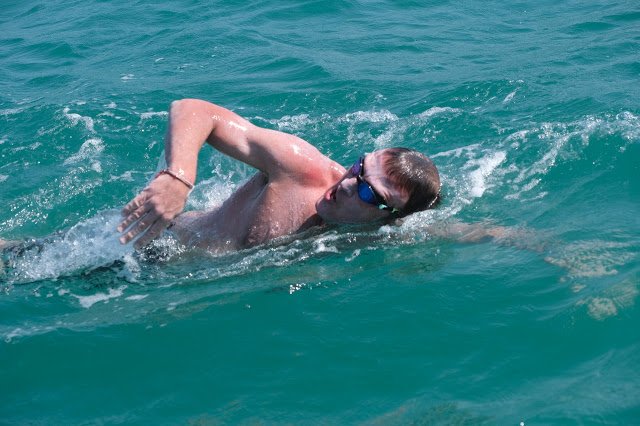 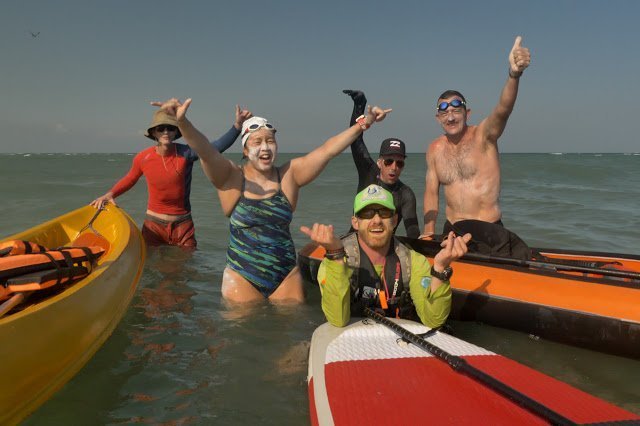 Edie Hu and Adam Moss set off from Talaimannar Beach on the Sri Lanka mainland at 5:30 am on February 26th to head across the Palk Strait. The 29 km course started near Adam’s Bridge in Talaimannar and finished 10 hours 18 minutes later on India in 10 hours and 18 minutes.

Their time is the second fastest time of official record after M. Tulasi Chaitanya who crossed in 2018 in 8 hours 25 minutes.

Hu reported, “Our crossing was not without high seas drama. The support team did not receive official confirmation from the Indian Coast Guard that the accompanying vessels from sponsor Sail Lanka, including the 54-foot catamaran, Sapphire, their ribs, kayaks and crew would be allowed to cross the Indian Maritime Boundary Line until just 4 km from entering Indian waters. Ultimately, they were told that they could proceed, but they were not allowed to step onto the dry land at Dhanushkodi, India.

We were accompanied all the way to the Indian Maritime Boundary Line by the Sri Lankan navy. While on the Indian side of the border, the Coast Guard assisted with navigation for the remainder of our crossing.”

Adam Moss is a British open water swimmer based in Hong Kong. He was inspired to attempt this swim after watching an episode of Top Gear, where the hosts floated tuk-tuks across the Strait. He trained for the last six months for this swim with Hu and other open water swimmers in Hong Kong. He said, “This was the most amazing day of my life. Without Edie, Sail Lanka, Vayu Resort, the Sri Lankan Navy and all the wonderful crew that we put together in a matter of weeks, this would not have been even remotely possible. I am blessed to have been able to pull this off, and thank the Indian Coast Guard for their support and cooperation.”

Hu, an American who is also based in Hong Kong, has an emerging marathon swimming career after swimming 45 km around Hong Kong and completing a two-woman English Channel relay crossing. She is the second woman to have swum the Palk Strait after Bula Chowdhury Chakraborty in 2014 in 13 hours 52 minutes. She said, “I am so excited and grateful that Adam had this dream and invited me to be part of this expedition. The conditions were perfect with easterly winds carrying us across the strait. It couldn’t have happened without the massive team effort and the cooperation of the governments from both sides of the strait.

We had to promise not to finish on dry land as a compromise with India allowing us to cross into their body of water and go to the end point. So we finished approximately 50 meters from the end where we could stand in about 50 cm of water.”

With the expedition completed, Moss wants to retroactively raise money for Youth Diabetes Association in Hong Kong, as well as other deserving charities on both sides of Palk Strait.

Pierre Pringiers, owner of Sail Lanka, said, “This is the first passage to India for our company thanks to the Indian Coast Guard and a major step for the future of tourism and economic development in the north.”

Hu summarized their adventure, “The water is around 25-26°C. It was clean and safe. The Sri Lankan’s were very supportive because they really want the tourism. There’s a wonderful place to stay right at the tip in Talaimannar for swimmers to prepare for the swim.

The best time of year is either end of February or March. The Indians have all done it in March when there is no wind and the water is super flat. We had an easterly wind that worked to our advantage. The rest of the year is either monsoon season or extremely windy – it is a kite surfing mecca.”