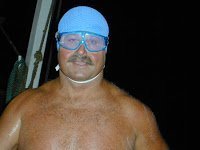 If there is anyone who has taken the sport of open water swimming hook, line and sinker, it is El Sharko, otherwise known as Christopher Blakeslee.

The stalwart of the San Francisco Bay community and South End Rowing Club is one the oldest swimmers of the English Channel.

He joined the Half Century Club on his England to France crossing at the age of 54 in 14 hours 44 minutes in 2004.

His enthusiasm for a challenging swim knows no bounds as he works both locally and globally.

At the local level, he is the race director for the South End Rowing Club’s 17th Annual Alcatraz Invitational where his fellow extreme swimmer Lynne Cox will speak this year. Globally, he always takes the time to inform and encourage swimmers from around the world via his enlightening and educational reports from Aquatic Park, always accompanied by a water temperature reading.

The colder, the longer, the rougher, the better for Blakeslee with one of the more memorable nicknames in open water swimming.