El Sharko’s In The Open Water

Chris Blakeslee, owner of Blakeslee & Crain Vineyard Advisors and Brokers in Sonoma, California, has an alter ego when he arrives in the San Francisco Bay: Sir El Sharko.

We caught up with Sir El Sharko, shown below in slow motion, whose motto is ‘I never met a shark I didn’t like‘, after he got out of in the cold San Francisco Bay. 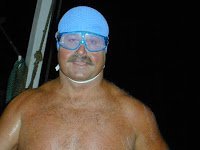 Q1. How many sharks have you seen?

El Sharko: I have seen many sharks while diving and swimming over the years.I was swimming as a toddler in the ocean as my father was the originator of Skin Diver Magazine in the early 1950’s. I have a respect for sharks, but am not really fearful, but I am wary in murky waters and at dusk (mistaken identity).

Q2. Did they scare you?
El Sharko: I am not afraid of sharks, but respect them as aquatic predators.

Q3. Are you interested in replicating the two Farallon Island swims (that were pioneered in 1967 by Colonel Stuart Chase and Ted Erikson)?

El Sharko: I will attempt to swim from the Farallon Islands to Aquatic Park [in San Francisco Bay]. It probably won’t happen this next summer for me as my work is impacting my training. But Karen Rogers has asked me to help her with the swim.

Q4. What other marine life have you seen on your open water swims?

El Sharko: I prefer cooler water, say in the mid-to low-50’s for a 1-3 hour swim as the temperature stimulates a good pace and provides a good rhythm. For a longer swim, the high 50’s would be ideal. In tropical waters, a leisurely swim in 72°F water is fine for a 1-2 hour swim. 82°F is a bit warm for me; I tend to overheat.