Elizabeth Beisel, Ambassador For Save The Bay 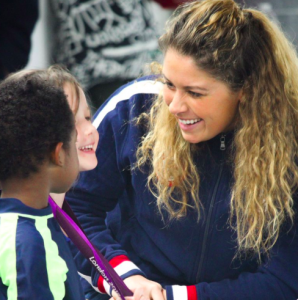 Courtesy of Save The Bay Swim, Newport to Jamestown Island, Narragansett Bay, Rhode Island. Olympic pool swimming medalists have participated in, organized and served as open water swimming ambassadors and patrons for decades around the world. Ever since 6-time Olympic medalist and multiple world record holder Johnny Weissmuller served as the International Commissioner of Marathon Swimming and represented the sport on behalf of the World Professional Marathon Swimming Federation throughout the 1960’s, open water swimming has long benefitted with myriad affiliations with these global pool swimming icons. Murray Rose, Dawn_Fraser, Natalie Coughlin, Shane Gould, Michael Klim, Misty Hyman, Dana Vollmer, Sandy Neilson-Bell and Gary Hall Jr. are among the many pool luminaries who have organized or participated in ocean, river, lake and bay swims. Olympic medalist Elizabeth Beisel is among these swimmers. She will return to her role as Swim Ambassador at the 43rd Save The Bay Swim on July 27th. Beisel will lead a youth swim clinic on June 1st and will share workouts with the Save The Bay Swim community. On race day, Beisel will speak and participate in the 1.7-nautical mile challenge and then present final awards to participants in Jamestown. “Having grown up on the beaches of Narragansett Bay and falling in love with its waters, I know how important it is to support Save The Bay’s efforts,” said Beisel. “I’m grateful for the chance to return to the Swim this year, and to do what I can to help preserve and restore our shorelines, beaches and Bay.” “The Save The Bay community is honored to welcome Elizabeth Beisel as our Swim Ambassador for a second year,” said Save The Bay Executive Director Jonathan Stone. “Beisel’s enthusiasm for our waters, for protecting and improving them, and for working with others toward a common goal of a better, cleaner, beautiful Narragansett Bay makes her the perfect representative for the Save The Bay Swim.” Beisel won nine medals at the Olympics, FINA World Championships, and the Pan Pacific Championships. Her clinic on June 1st at the Roger Williams Aquatic Center on the Roger Williams University in Bristol, Rhode Island is for swimmers ages 8-18 and will include 60 minutes of pool time featuring drills, starts and racing, in addition to a Q&A session and time for photographs with and autographs. All proceeds will support Save The Bay’s ongoing restoration, adaptation and education efforts. Registration is at www.savebay.org. For more information, visit swim.savebay.org/2019. The Save The Bay Swim celebrates cleaning up Narragansett Bay since its first official swim in 1977 and the organization’s founding in 1970. 100% of every dollar raised provides critical support to the organization’s mission to protect and improve Narragansett Bay and its watershed. Besides her Save The Bay Swim responsibilities, Beisel will be part of the upcoming cast on the television show Survivor. Copyright © 2008-2019 by World Open Water Swimming Association