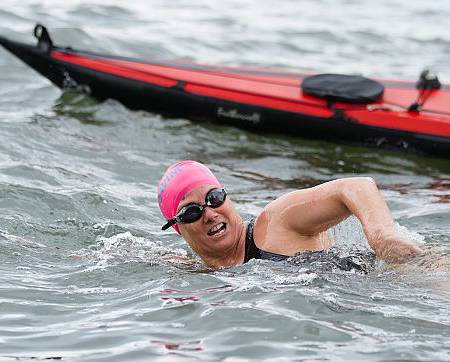 Record-setting Elizabeth Fry of Connecticut, U.S.A. set another world record by becoming the oldest person to complete a two-way crossing of the English Channel on August 20th.

Elizabeth added to her world record collection (which includes the records for the fastest “reverse-direction” circumnavigation of Manhattan Island and the 35-mile double Ederle Swim between New York and New Jersey) by swimming 24 hours 39 minutes from English to France and back.

With three previous English Channel crossings under her cap, she began at 11:15 pm on August 19th and swam 13 hours 20 minutes to France. Upon reaching shore, she took a very short break on the French shore and then swam back to England in an even faster 11 hour 19 minute effort.

“I took enough time to stand up, hear the horn and get back without adding too much more to the lashes from the dragon teeth,” recalled Elizabeth about the time she spent on the French shore.

Photo of Elizabeth Fry by Kevin Hagan of the Daily News.