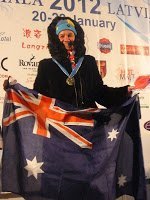 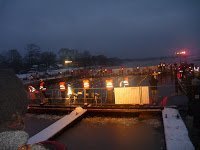 Jim Boucher, President of the Surrey County ASA, described the conditions and competition at the 2012 World Winter Swimming Championships in Jurmala, Latvia in colorful terms. “I was there, but the Western European blokes tended to lose out to Eastern Europeans who looked like they generally caught and killed their daily lunch rather than get it from a sandwich bar. [The ambiance of the championships is] the most amazing sensation to race in cold water and the social nature of the event makes it memorable.”

“Ellery won the 25m and 50m freestyle events in her age group in Lake Bled, Slovenia at the 2010 championships. She defended her titles in Jurmala to the delight of a large team from the South London Swimming Club based at the Tooting Bec Lido at the recently held 2012 Championships.

The water went from 0.5°C to a bit less on Sunday, leaving small bits of ice on the surface. The River Lielupehad ice floes passing the marina where the competition was held where the air temperature was 1°C on Friday and -3°C by Sunday
.”

But short and cold is not only what Ellery does well. At the age of 64, she is also the oldest woman to have swum Lake Zurich and will bring her talents to the Ederle Swim between New York and New Jersey in 2012.