Photos courtesy of Brilliant Studios, Grace Bay, Turks & Caicos. The 10th “Race for the Conch” Eco-SeaSwim was held on June 29th in Grace Bay in Turks & Caicos – where women proved their mettle. In the men’s 1-mile race, Luke Haywood, captain of his country’s 2019 CARIFTA team, battled it out with American Clay Britt and defending champion Dan Redmond to win in 22 minutes 14.6 seconds. But it was an American female swimmer who took first overall.  Elodie Westbrook Mitchell dashed up beach in a thrilling finish to cross the line just 1.1 second ahead of Haywood to win both the overall and women’s division.  Local swimmer Lillian Taylor finished second. In the women’s 800m division Alex Maclaren did the same, beating all men and women.  Maclaren finished ahead of both Georgia Greatrex and Selin Kilic when Maclaren crossed the finish line 1.5 seconds ahead of Greatrex in time of 13 minutes 0.3 seconds. In the men’s 800m race, 12-year-old Sean Walters won in 13 minutes 12.3 seconds, coming out of the water ahead of defending champion Jack Parlee who took second. The youngest swimmer in the competition, 8 year old local swimmer Lenika Hamilton finished 16th out of 22 in the women’s Division. In the 2.4-mile Ironman distance swim, American Ginny Jordan won the women’s division and overall title in 55 minutes 24.4 seconds followed by Kelly Westbrook and Maryann Savage both of the USA. Americans Shawn Nowak, Wally Dicks, and Steve Wiper finished first, second, third respectively in the men’s division.  11-year-old Tajhari Williams finished fourth. Williams also received the Special Award for the swimmer who best personified determination and love of the sport. 19 children participated in the age 10 and under 100m Children’s Swim. Ben Stubenberg, Co-Director & Founder, said, “It’s so gratifying to watch the expansion of this race over the years since 2010 when we got this started, as well as the increasing numbers of talented TCI swimmers. Once again, Grace Bay provided the best open water swim racing conditions in the world that absolutely enchanted our visiting swimmers and their family and friends.” Chloe Zimmermann, the other Co-Director & Founder, added, “This may have been the best race yet with many more local swimmers participating and excelling thanks to the outstanding local swim training programs and excellent coaches. Of course, none of this happens without generous sponsors and dedicated volunteers who give so much of their time.  I can’t thank them all enough.” The “Race for the Conch” Eco-SeaSwim took place in front of the Royal West Indies Resort with 130 swimmers, half coming from abroad, mainly the US and Canada. Top finishers received unique conch trophies carved by Stanford Handfield with wooden encasements created and painted by Lucy Stubbs, Driftwood Studios. Funds raised from the event go mainly to support Provo Children’s Home, as well as the Turks & Caicos Islands Swim Federation. In keeping with the “eco” theme of the event,  the race banned used of non-reef safe sunscreens. Flamingo Pharmacy provided free reef safe sunscreen Sea2Stream for all swimmers. Only paper straws were used for the coconuts provided by Cocovibes. Next year’s race in 2020 is tentatively set for June 27th 2020. Copyright © 2008-2019 by World Open Water Swimming Association 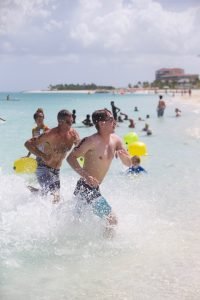