Eloquently Explaining The ‘Why’ Of Open Water Swimming 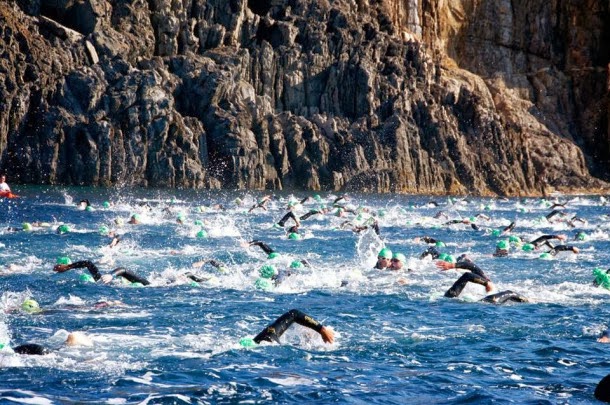 From what we have observed about open water swimmers, the swimmers with great relationships with the general (non-swimming) public and the media are those who can eloquently express ‘why’ they do their swims.

While many swimmers are more concerned about the ‘how’ of open water swimming (e.g., how far, how fast, how cold), the non-swimming public is riveted when an open water swimmer can describe in understandable terms their motivation for going beyond the shoreline.

People want to know what drives open water swimmers to push themselves beyond the normal. This story-telling talent – these oratorical skills and writing abilities – are renowned among swimmers like Lewis Pugh, Lynne Cox, and Diana Nyad.

The public does not engage with the open water swimming world in terms of rules or governing bodies; they understand the sport of swimming more through the emotion, drama and inspiration provided by its athletes. While feeding and pacing, drafting and non-drafting, training and tactics are issues important to swimmers; drama and inspiration are more valued by non-swimmers. The public does not view the sport through a pair of goggles; rather, the public views open water swimming more as humans vs. nature where swimmers are the underdogs.

Darren Miller explains how the explanation of the why enabled him to get sponsored and continue on in a sport that demands much physically and mentally, as well as financially and logistically. “I obtained a large sponsorship for the Oceans Seven because I described the ‘why’ behind the challenge – performed in the name of the families at the hospital. I spoke of emotion, drama and inspiration and how that played a part in my English Channel training. It was the thought of subjecting oneself to frigid temperatures on purpose, assisting an ailing child’s family afford food during their stay, and the desire to light a spark in the younger generation intrigued them much more than explaining marathon swimming rules, feeding habits, and the difference between the CS&PF and CSA.”

When we listen to great speeches by open water swimmers, tears and laughter often flow. The room remains quiet, the eyes riveted on the speaker, and the audience can never guess what the swimmer will describe next. Swimmers who have a firm grip on an audience’s (or sponsor’s) attention can elicit deep-seated emotions of awe and respect, generating wonder and joy at seeing a human seek out and reach their goals beyond the shoreline.

Photo courtesy of Mauricio Prieto at the Marnaton eDreams Cadaqués in Spain.