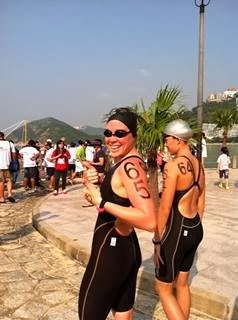 Not since Chad Hundeby in 1994 has an American earned their way on top of the FINA open water swimming rankings.

Emily Brunemann of Michigan broke that long 19-year drought with her FINA 10K Marathon Swimming World Cup series victory in a close finish over Martina Grimaldi of Italy and Ana Marcela Cunha of Brazil. Her victory came down to the last few strokes in the last race of the long season that lasted from January to October with races in Brazil, Argentina, Israel, Mexico, Canada, China and Hong Kong.

Even after the last stroke of the season was taken and the point totals counted by FINA, there still remained uncertainty. But at the end of the day and end of the season Brunemann stood on top of the FINA professional marathon swimming season for the first time in a long time for an American.

Her season-long efforts with tens of thousands of air miles in between were the reason why she was nominated for the 2013 World Open Water Swimming Performance of the Year. Like the other 14 nominees, Brunemann is a mixture of all seriousness in the water and friendly smiles and a personable nature on land. Her nomination for a WOWSA Award is indicative that the Kentucky native:

Her nomination reads, “There are so many fast American women, it is tough to qualify for the USA national team. But when it comes to facing international competition, Emily Brunemann proved the crème-de-la-crème in 2013. From Brazil to Hong Kong, from Canada to Mexico, Brunemann was consistently competitive and won the overall title of the FINA 10K Marathon Swimming World Cup circuit. When each of the races came down to a photo finish, she proved her mettle, her talents, and her drive. But win or lose, her smile was as bright as her future. Her appreciation of her coaches and volunteers was always obvious. For her commitment to travel the world as she balances work, for her love of tough competition, for the purity of her joy in representing her country, Emily Brunemann’s 10-month odyssey on the World Cup circuit is a worthy nominee for the 2013 World Open Water Swimming Performance of the Year.“

Her fellow 2013 WOWSA Open Water Swimming Performance of the Year nominees include: