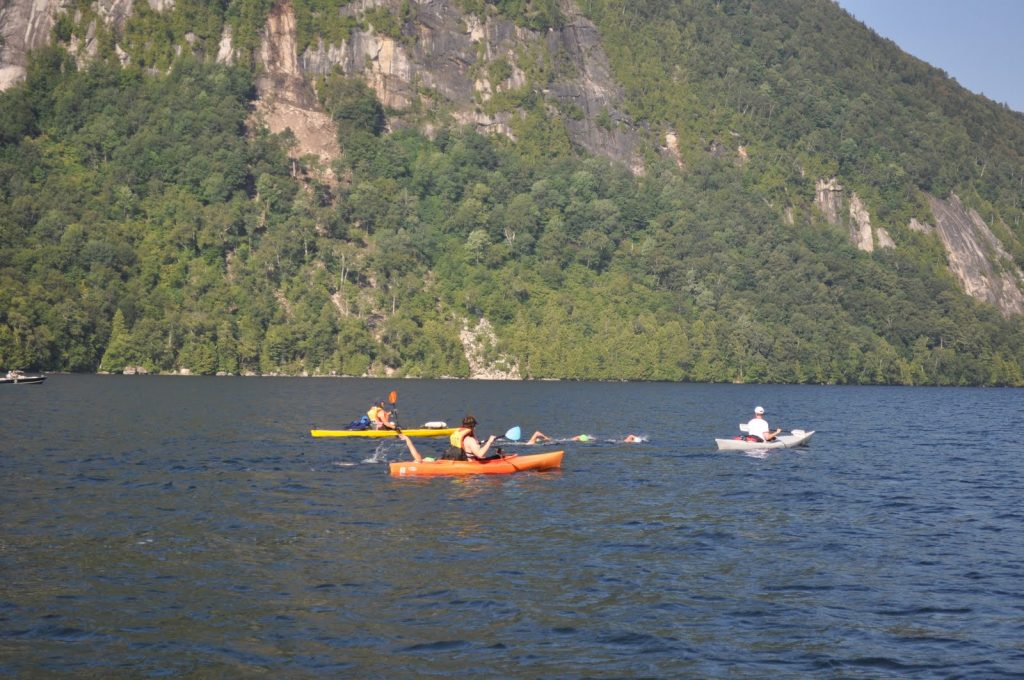 Emma, the winner of the affiliated Kingdom Swim, along with the other athletes, kayakers and volunteers enjoyed the pristine, spring-fed water amid the towering cliffs above and the 400 feet of pristine water below. The race was a stroke-for-stroke competition that was a joy to witness.

Charlotte Brynn, 45, the defending champion from New Zealand, swam side-by-side, stroke-for-stroke during the first three miles with Emma. But the youngster and her kayaker Donald Houghton pulled away, setting a new record of 1:53:39, impressively smashing the old record by 17 minutes.

Charlotte finished three minutes later with a time of 1:56:36. In third place was cold-water channel veteran Elaine Kornbau Howley in 2:19:24.

All three women will be swimming the 26-mile length of Lake Memphremagog on the weekend of September 11th. The trio will challenge themselves in In Search of Memphre, an international swim to promote a more open border with Canada and to fundraise for IROC, a sports, fitness, and recreation center.

The cool and pristine waters of the Northeast Kingdom lakes are perfect for open water swimmers who regularly do ocean swims in 6060.8°F (16°C) or below. But wetsuits make lakes like Willoughby accessible and swimable for many who would otherwise not consider undertaking this kind of a swim.

Natalie Griffith completed the swim in 1:52:30 and was the overall wetsuit winner. Not far behind 29-year-old Natalie was the male winner of the wetsuit division, 66-year-old Clifford Pollard with a time of 2:13:40.