Steven Munatones 10/08/2019 Chieko Smith, open water swimming No Comment
Courtesy of WOWSA Ocean Fest, Seaside Lagoon, Redondo Beach, California. Yuko Matsuzaki asked, “Do you see the sea lions?” “I only see three,” answered Steven Munatones. “No, there are four,” answered the 57-year-old Japanese swimmer who was on her way to set a Guinness World Record for time spent swimming in an Endless Pool. Matsuzaki was hallucinating in the early morning hours of October 6th. She had been swimming in the same place for over 16 hours and she still had another 6 hours to swim in the darkness. Matsuzaki had set out to swim 24 hours in an Endless Pool E500 at the WOWSA Ocean Fest. Her goal was to swim from 8:00 am on October 5th to 8:00 am on October 6th. “It is just one 24-hour period of my life, but I have always wanted to be in the Guinness World Records. It was a book that I read from cover to cover when I was a kid,” explained Matsuzaki. The Endless Pool had been shipped to and installed at Seaside Lagoon in Redondo Beach. “While many open water swimmers, especially nearly all the members of the 24-Hour Club, have experienced hallucinations during their channel swims and other long marathon swims, it was interesting to see Yuko have her own hallucinations in a pool,” observed Munatones. “I saw sea lions and sea dragons while I was swimming,” recalled Matsuzaki who was previously a fin swimming champion before a chance meeting with 7-time world champion Paul Asmuth convinced her to try marathon swimming. She turned Asmuth’s introduction into a long International Marathon Swimming Hall of Fame career. “At one level, I knew that I was swimming in an Endless Pool,” explained the Tokyo native. “But I was swimming for hours and hours staring down at the same thing: an Endless Pool logo on the bottom of the pool. Eventually, that logo became black coral and I told Chieko Smith and Chris Morgan who were part of the observer team to protect me from the worms that were peeking out from the black coral.” Despite imaging playful sea lions, scary sea dragons and menacing coral worms that were sharing the Endless Pool with her, Matsuzaki kept her cool throughout the 24-hour stationary swim. “My right shoulder hurt so badly after a few hours of focusing on swimming in position.” Eventually after the 16th hour, Matsuzaki started to swim freestyle with only her left arm because the pain was too much. Then she shifted to breaststroke for up to 10 minutes at a time. “Gosh, I could not remember a time when I swam breaststroke. After a 20-year career as a marathon swimmer, all that I am used to swimming is freestyle. But I was in so much pain that I had to switch to breaststroke. So many people worked on this project with me including Aimee Soto and Nick Kale. I could not let them down. I have down other 24-hour swims in addition to a 33-hour swim in Lake Cane in Orlando, but this was really hard.” “By the 14th hour, I did not see how she was going to finish,” said Munatones. “It was clear that she was in a lot of physical pain, but she was always mustered a smile at people who cheered her on. She always maintained a clear train of thought – except for that hour or so when she was colorfully imaging creatures in the Endless Pool with her. It is always better to go with the swimmer’s hallucinations and explanations. So when she told me about the sea lions, I didn’t disagree with her and tell her that she was just dreaming. We went with her mindset at the time.” 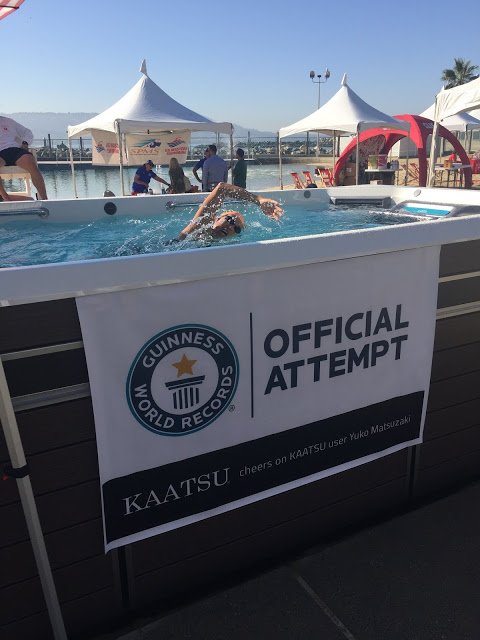 But fellow International Marathon Swimming Hall of Famer Shelley Taylor-Smith and fellow Guinness World Record holder Josef Köberl also stayed up to cheer Matsuzaki on late into the night and the next day. “Shelley and Josef, established open water swimming stars, knew how best to support Yuko. Shelley wrote her funny and inspirational messages on a whiteboard and Josef got in the water with her. They were a huge part of how Yuko was eventually able to establish a new Guinness World Record.” Officially, Matsuzaki started swimming at 8:00 am on October 5th and finished swimming at 8:01 am on October 6th, taking up to 5 minutes break per hour as permitted by the Guinness World Records rules. Copyright © 2008 – 2019 by World Open Water Swimming Association