The Energy And Enthusiasm Of Sandra Bucha Continues 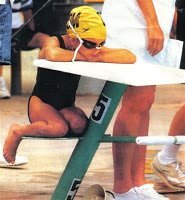 HINSDALE. One of the most influential luminaries in athletics in the United States, Dr. Donna Lopiano, former president of the Women’s Sports Foundation, wrote glowingly about Sandra Bucha, one of the stars of the world professional marathon swimming circuit in the 1970s.

“Between 1973 and 1975, Sandra was the female winner in the nine professional marathon races she entered.

Donna talks about her admiration for Sandra’s integrity and efforts to advance swimming and other sport opportunities for all women. “As a principal in a successful lawsuit against the Illinois High School Association, this legal action resulted in the initiation of girls’ sports programs and state interscholastic championships for girls in the State of Illinois. Her actions as a social justice advocate affected the opportunities of thousands of girls to participate in swimming and other sports.

The energy and enthusiasm she brought to her swimming career and initial social justice efforts continued as she graduated from Stanford University with honors as an undergraduate and earned her Doctor of Law degree at Indiana University. Her career as a champion athlete and record as a conscientious citizen have been exemplary
.”

Sandra’s efforts and exploits, along with other pioneers and leaders, made all the difference in the world to young female athletes.

Photo shows a young Shelley Taylor-Smith, dreaming big at the start of her swimming career.