Eney Jones, Pulling For Others 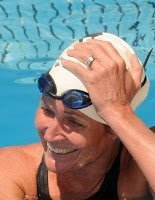 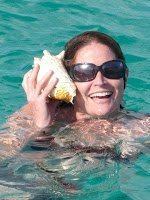 Eney Jones will re-release her patented EneyBuoy, an innovative plastic pulling buoy whose buoyancy can be adjusted.

“The ability for a swimmer to modify the buoyancy while pulling can mimic the fluctuating conditions and buoyancy in the open water,” said the world-class swimmer from the University of Florida who has won masters championships in every freestyle event from 100 yards to 10 kilometers.

“Up and down, and getting sloshed around the heavy chop is hard to replicate in the pool, but this buoy helps give swimmers that feeling of being in a washing machine.”

Since her days of being on the USA national team to her days coming out of the water as the first woman at the Hawaiian Ironman (on six different occasions), the ever-optimistic and smiling Eney has been a popular and personable friend, teammate and mentor – both on the pool deck and onshore.

Over the decades, she has been a coach, clinic instructor, writer, model and product developer, working with swimmers of all ages and coaches of all backgrounds. As a former professional triathlete now living in Boulder, Colorado, after years cycling at altitude and hitting the roads, she has turned back to the water and enjoys drinking from the Fountain of Youth.

“The pavement cares how old you are, but the ocean does not.”

“There’s many words than can describe Eney, but if I had to pick one it’d be timeless,” said Lance Panigutti of Without Limits Productions. “Whether you were born in the 70’s, 80’s, or even the 90’s, I promise that Eney will find a way, in and out of the pool, to feel like your peer.

I’ve never met a more caring, competitive, and balanced individual in over 20 years as a competitive swimmer and coach
.”

The 52-year-old wonder has maintained her endurance and speed over the decades through intelligent hard work. “I am a big proponent of cross and varied training, running, lifting, sprinting, speed change, kicking, even individual medley for open water swimmers, but as I age I invoke the “Kennedy Clause”. That is, if you were alive when Kennedy died, you can pull any set you want.

Pulling is fun and the EneyBuoy makes you fast and furious in practice. It is not made of styrofoam and stays cleaner. It does not get waterlogged or leave scrape marks on your legs
.”

Make that fast, furious and fun. Eney’s enthusiasm for the sport of swimming and helping her teammates never recedes. “It is very inspiring to train with Eney.

Her love, enthusiasm and passion for swimming keeps me motivated and excited to swim. And of course, her jokes keep me laughing throughout the workout
,” commented Flora Duffy. “Eney is a refreshing breath of fresh air and an inspiration. Her athletic prowess and striking beauty is evident, but what completes the package is her unwavering support of others combined with a down-to-earth can-do attitude and a twist of comedic flair,” said teammate Kathryn Eastley.

“One such ambassador of our Tampa bay Frogman Swim is Eney Jones who participates and supports our overall mission” said race director Rory O’Connor. “Demonstrations of this genuine concern for the bigger picture are critical to our event, and the sport’s future success.”

Success has never been separated from Eney who does not fear tussling with the men in front in every open water race she enters. Yet she is the first to smile and congratulate them at the finish. “To have remained at the top level of athletics for 40 some years is remarkable. From a world class swimmer to world class triathlete and now a world class open water swimmer, Eney has always been hard-working, coach-able and a great role model. She is always there to help out my younger swimmers as an athlete and as a mentor,” explained Grant Holicky, Eney’s coach at RallySport Aquatics.

Multi-time USA Swimming national open water swim team coach Rick Walker recalls, “I have had the privilege to work with Eney during n open water development clinic. She is engaging, inspirational, and a captivating speaker. I was amazed at the attention she mastered with such a diverse age group. Eney is a one of a kind that brightens the day of whoever is around her.”

Eney Jones, pulling for those along the way, in her lane, onshore and in the open water.