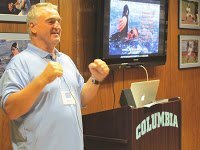 Open Water Source enjoyed a day in South Africa with Martin Strel, known as the Big River Man. The Slovenian multiple world record holder cheered on the athletes at today’s Speedo 10km Challenge at Midmar Mile week while his passion and love for all things open water swimming was clearly evident from morning to evening.

At his breakfast speeches and over dinner meetings, he enthralled his guests, fans and friends with stories of his unprecedented experiences around the world.

He talked about his 4,003K (2,487-mile) stage swim down the Yangtze River in China. He explained how he started at 1,920m (6300 feet) at the beginning of the Yangtze River and arrived in the East China Sea in Shanghai 40 days later. With the volume of water flowing downstream from such altitude, Martin recalled how he was swimming at 27-28 km per hour at times and how he always had to be careful of the dangerous, life-threatening undercurrents. “You cannot imagine how fast Martin was swimming, but we had to be careful at all times,” said his son and right-hand man Borut Strel.

In contrast, Martin battled his way down the 5,268K (3,273 miles) of the Amazon River, traversing along three countries. “The Amazon was murky and the dangers were everywhere. Pirates were watching us and we worked with local guides who helped us get out of difficult situations.”

The dangers he described ranged from piranhas to bacteria. “The Yangtze was so polluted. It is pollution chemically and it really took a lot out of me. Every day, I had to take medicines and spent 5-6 hours in a hospital to recover. Every day. And the doctors would then call ahead to the next hospital who they get ready for me.”

“Sometimes, we would touch him and he would cry out in pain because it hurt so much. It was incredible to see,” said Borut who is his father’s computer-savvy logistics expert. “Normal people cannot do that. He is able to separate his physical pain from his goal of swimming the big rivers.

And the logistics were difficult, but we had to be prepared for everything. We had Internet connection and satellite phone capabilities in the Amazon – deep in the heart of the jungle. This was not only to provide information on his swim on a daily basis, but also as a safety measure. If something happened to us, we had to be able to communicate
.”

And communicates he does. “In many places, people could not believe we were swimming. There are places in Peru along the Amazon River where the local people do not know where the Amazon ends. There are over 1000 tributaries flowing into the Amazon. Unlike the Yangtze River where we had to navigate down thousands of meters in altitude, there is only a 253-meter drop from the beginning to the end of the Amazon. So the water in the Amazon flows much slower at 4-6 kilometer per hour, but there are eddies and undercurrents that can suck you down and take you somewhere.”

But Martin’s approach is systematic and professional. “Swimming, I can do. But we also have much logistics and planning. We study everything. We study the currents, the marine life and all the logistics and communications. We have a great team, from 7 different countries. They are the best in the world. And I am not just saying that. We face so much on the swims. But people can get tired during the swims. So I always have to think how to keep everyone on my team focused and friendly with each other.”

Focused and friendly, those are just two of the characteristics that Martin has in abundance. He has a way to put people at ease, while also entertaining them with his exploits and inspiring them how he goes about realizing his dreams.

“There are so many beautiful places in the world. Swimming is such a great lifestyle. Now many people are doing adventure swims like Martin,” explains Borut. “We have people from all over the world with a goal of leading a healthy lifestyle and exploring the beautiful locations to swim. They don’t have to swim fast; they just enjoy it.”

As Martin has done all his life.