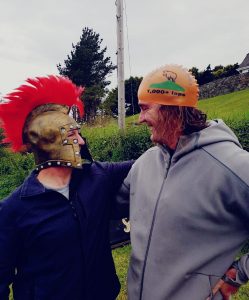 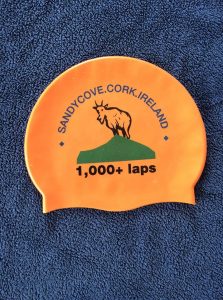 That idea of honoring swimmers who have oft repeated open water swims in the same venue is a concept worth replicating around the world.  Charlotte Brynn, a Kiwi marathon and ice swimmer from Vermont, visited Cork, Ireland three times and suggested to Ned Denison that the Century Swim and Millennium Swim honors be issued to these swimmers. Now local swimmers are recognized when they complete 100 laps of Blueberry Island in Massachusetts as well as in Cork. Denison recognizes Century Swims and Millennium Swims around Sandycove Island with specialty swim caps after consulting with Emich, the senior Centurion in California, whose detailed swim logs are archived in the International Swimming Hall of Fame. 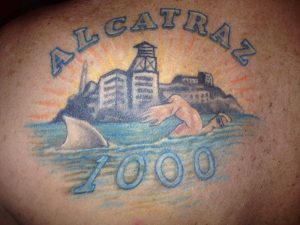 Denison explains, “As Gary shows with his 1,000th Alcatraz Island tattoo [shown on left], Cork swimmers can now proudly wear signature caps that honor their 100th, 500th and 1000th laps of Sandycove Island.” The cold-water swim is a 1.6 km circuit around the island from the mainland. Today, Eoin O’Riordan earned his 1,000th lap cap [see photo above].  It was presented to him by Centurion Robert Bohane who has done more than 1,900 laps himself. Copyright @ 2008-2019 by World Open Water Swimming Association