The Epitome Of A Beach Ready Body 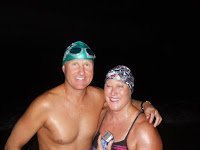 Erwan teaches people to move naturally and efficiently in the manner of our nature-dwelling ancestors.

Erwan’s natural and alternative approach to fitness and lifestyle leads him to believe that fitness is less about what the human body looks like than what it can do.

In an interview with Laine Bergeson of Experience Life, Erwan explains his concept of a beach ready body. “Are you able, if you see someone drowning, to dive in the water and swim fast? Can you hold your breath, dive and pull someone up to the surface, and then swim, making sure that his head is out of the water? At the shore, can you life and carry this person to safety? When you can do that, you’re beach ready.”

Erwan’s definition of a beach ready body sounds like one of the hundreds of thousands of swimmers who line up at the shores of open water races in oceans, lakes, bays and rivers around the world. Barbara Held, a prolific marathon swimmer, is a perfect example of a beach ready body.

Barbara, who was one of the first female paramedics and firefighters in California, has saved many lives in numerous precarious situations throughout her three-decade decorated career. She can, as Erwan explains, do everything required of a beach ready body. But her passion now is challenging the channels of the world. Day after day, logging in the miles in La Jolla, California, throughout the winter acclimating as she knows best for her upcoming English Channel attempt.