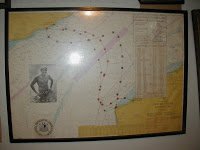 Jon Erikson, a 1981 inductee in the International Marathon Swimming Hall of Fame as an Honour Swimmer was clearly efficient when it came to swimming the English Channel.

Not only was he the youngest swimmer to completed a France-to-England crossing in 1969, but he also did a two-way crossing 10 years later with his first leg as the fastest crossing of the year. He later did two English-to-France crossings in 1980 in advance of becoming the first person to complete a three-way crossing in 1981 with a historic 38 hour 27 minute effort.