Ersin Aydin Passes Away, Swam For The Fatherland

Ersin Aydin Passes Away, Swam For The Fatherland

Courtesy of WOWSA, Huntington Beach, California. “I’ve done it for the Fatherland,” said Ersin Aydin, a Turkish swimmer who swam in a shark cage from Mersin in southern Turkey to Kyrenia (Girne) on the north coast of Cyprus in 43 hours 20 minutes in 1973.

According to Sports Illustrated in 1973, Ersin ate 14 lamb chops, 13 chocolate bars, 20 cheese sandwiches, nearly eight pounds of peaches, 25 glasses of tea and three jars of honey while becoming the first person to swim from Turkey to the island of Cyprus, a total of 96 km.

Over the course of his career, he completed 27 marathon swims, totaling 1,160 km, including swims in the Sea of Marmara, the Black Sea, the Nile River, the Bosphorus Strait and the Dardanelles. His races included the Nile International Marathon Swim, the Çanakkale Marathon, andthe International Istanbul Marathon five times. 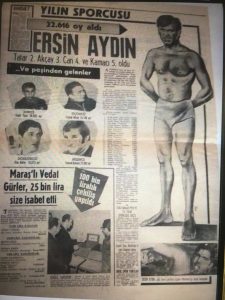 In 1976, he wrote a book called Yüzme (Swimming in English) and was awarded the Milliyet Spor Ödülleri (Milliyet Sports Award), given to the sportsperson of the year in Turkey in 1974.