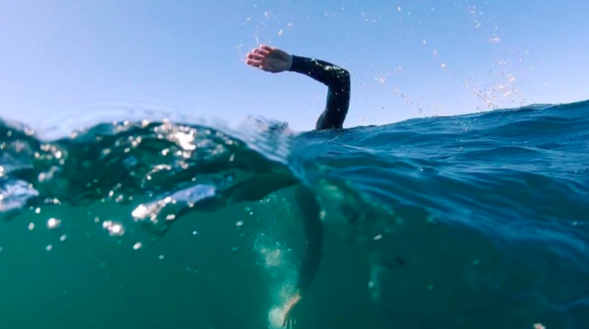 Ben Lecomte attempted a transpacific solo stage swim from Choshi, Japan, starting on June 5th with an aim to reach San Francisco, California after 8,721 km, estimated to take them 6 – 8 months.

Lecomte did not complete The Swim, but they did spend 5 months and 15 days at sea.

Lecomte and his escort team inched their way across 1,523 nautical miles (2,822 km) in the Pacific Ocean as they encountered storms, relentlessly difficult swimming conditions, and countless marine life from whales to hundreds of dolphins.

While sharks and turtles were also commonplace, but their daily encounters with plastic and marine trash was most shocking. Part of Lecomte’s mission was to collect data for 30 scientific institutes, so the crew obtained and stored more than 1,700 plastic samples of flotsam that they encountered in the Pacific.

Despite The Swim v.1 ended in a DNF, Lecomte and his team are now focused on plastic pollution on The Swim v.2. Lecomte and 10 crew members will head back to the Pacific Ocean this May when he will swim through the Great Pacific Garbage Patch. He reports, “We will focus on dispelling myths surrounding the patch, as well as helping scientists better understand what is accumulating in the gyre. Our production partner Seeker helped with this narrative during our first stage of the ocean crossing, and received more than 1 million YouTube views [see video below].”

“We are now seeking new crazy, fun, passionate and skilled volunteers to help on the next leg of the adventure. We’re looking for new crew members to volunteer on a 3-month swimming and sailing expedition from Hawaii to California. Positions include marine engineers, scientists, sailors, medics, influencers and plastic warriors available from May to September 2019.”

Previous sailing experience is preferred, but not required. Send your CV to [email protected]

To watch a summary of the first attempt, visit here.