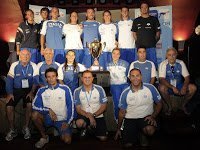 The always-exciting, fiercely-competitive European Open Water Swimming Championships will be held in Lake Balaton between July 26-30.

Where many of the world’s best open water swimmers get valuable experience and a setting where several world champions get their teeth cut on elite competition, the Championships are always a battle.

The schedule, held in the largest lake in central Europe, minus the 5K team time trial is as follows:

Elena Nembrini, the Swiss national team coach, will speak at the Coaches Forum on the Secrets of the Accompanying Coach in an Escort Boat.