Éva Risztov Rising To The Occasion 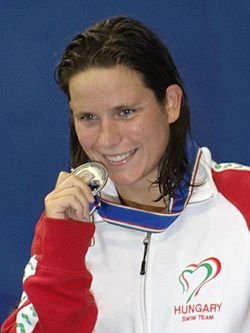 Éva Risztov Rising To The Occasion

Three-time Hungarian Olympian Éva Risztov has always made the right decisions for her at the right times.

She initially succeeded at the international level in pool swimming, competed in water polo for her water polo-oriented country, and eventually won the gold medal in the Olympic 10K Marathon Swim over her lengthy aquatics career.

Then the career took a temporary detour after her brief retirement after the 2004 Olympics when she finished fourth in the 400m individual medley. She briefly focused on water polo and other sporting activities.

But the tide for her changed in 2009 when she returned to competition as an open water swimmer. She competed on the FINA 10K Marathon Swimming World Cup series and raced at the 2011 FINA World Championships in Shanghai, gaining valuable experience. By 2012, she won her first European Open Water Swimming Cup race in Eilat, Israel.

In June 2012, only a few months before the London Olympics, she just barely qualified for the Olympics by a few tenths of a second after just out-touching her Hungarian teammate Anna Olasz at the FINA Olympic Marathon Swim Qualifier in Portugal where she finished second to American Haley Anderson.

But she continued to refine her tactics and gain confidence under her coach Ferenc Kovácshegyi. By August 2012, she was prepped for the race of her life. Not only did she compete in the 400m freestyle (16th), 800m freestyle (13th), and 400m freestyle relay (15th), but she also ended up beating pre-race favorite Keri-Anne Payne and reversed the order of the Olympic qualifier when she out-sprinted Anderson by 4 tenths of a second for gold.

She qualified for the 800m freestyle and finished 13th at the 2016 Olympic 10K Marathon Swim in Copacabana Beach.

But the celebrated Hungarian star is now sharing her story of success with future generations of athletes and helping them forge their own roads to self-fulfillment and success.

For more information on her retirement, read more here.