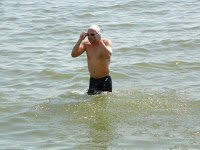 Evan Morrison of Chicago, Illinois won the 24-mile Tampa Bay Marathon Swim going away today in 8:59 as he also beat all the relays except a 3-person team of Davidson College swimmers. “There were rough seas from start to well around Pinellas Point. Then, the swells were in the same direction as the course through St Petersburg. During the last portion, there were somewhat calmer waters most of the way to the finish.”

Morrison has an unusually busy summer coming up. After finishing the Swim Miami 10K, he stepped up at today’s Tampa Bay Marathon Swim, but he still has the Manhattan Island Marathon Swim in June and the Ederle Swim in October and the Kingdom Swim in Vermont and the Catalina Channel sometime in between. That is one very heavy Barra-esque schedule.

Television coverage of the event is here.

The final results of the soloists and relays: