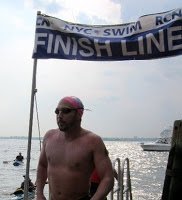 31-year-old Evan Morrison from Goleta, California set the record in the Ederle Swim this weekend with a 5 hour 24 minute effort from Sandy Hook, New Jersey to Manhattan Island, New York. He broke the existing record of 6:06 by Liz Fry as did 16-year old Emma Otto-Moudry who finished second in 5:36.

The swim, originally scheduled for Saturday, was postponed due to storms and a small craft advisory. Sunday’s race saw 16 of the 19 swimmers finish the 17.5-mile race. “The swim was a study in contrasts. We started at the low-lying spit of Sandy Hook and swam towards the towering skyscrapers of Manhattan. We encountered the dark blue-green hue of the Lower Bay and the muddy Hudson brown of the Upper Bay.

We faced the tailwind-aided waves of the start and the confused chop of the finish. There were tiny swimmers next to enormous barges and cruise ships,” described Evan.

“I was drawn to the Ederle Swim as a low-key denouement for a busy season of marathon swimming (which also included 24-mile Tampa Bay Marathon Swim, the Manhattan Island Marathon Swim and the Catalina Channel). I always enjoy spending time in New York, and with the good people of CIBBOWS. One can always count on a well-run event from NYC Swim.” And Evan knows his history – and luminaries in the sport when he sees them.

“I didn’t see Emma behind me – unfortunately the chop was too “busy” to see much of anything. I did, however, get to meet her coach, Penny Lee Dean, which was a special privilege.”

Photo of Evan Morrison above is courtesy of Kathy Langdon. Photo of Janet Harris (5th overall) as she approached Manhattan is courtesy of Vlad Brezina.