Evan Morrison Swims From A Dark Place To Hollywood 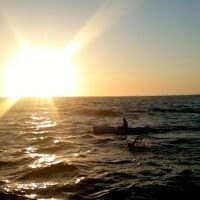 Evan Morrison, a clever Princeton graduate, set a record swimming from Santa Cruz Island to Hollywood Beach in Oxnard on the California mainland.

Morrison swam the 19-mile channel in 9 hours 47 minutes, starting just after midnight. 40 minutes faster than the previous record and the other 8 swimmers who have successfully crossed the difficult channel governed by the Santa Barbara Channel Swimming Association.

While the marathon swimming community recognizes that its sport is generally 80% mental, the remaining percentage remains a grind.

“At times, it took all the effort I could muster to just put one arm in front of the other. I’m still not sure how I made it across. Just standing on dry sand at the end seemed more important than any records.

Winds were higher than forecast, producing confused chop that made swimming difficult. My escort boat and kayak were getting blown around, which made it difficult to hold a straight line and avoid collisions. I think [2008 Olympian] Mark [Warkentin] was working just as hard as I was. To make matters worse, there was no moonlight, creating disorienting conditions for both swimmer and crew
,” explained Morrison to Presidio Sports.

Warkentin who was in the water about 70% of the time, knows tough conditions as he has encountered much during his career. He described a tough night to Presidio Sports, “It was a humbling admission when I eventually told Evan that I needed to go rest on the boat, and it’s a true testament to his determination and conditioning that he didn’t quit along with me. Everyone hoped that the conditions would get just a little worse, so we’d have a good excuse to stop. Unfortunately, the conditions were just barely good enough for us to keep trudging along.”

But with the mind of a Princeton man, Morrison has the body of a tiger.

Photo of Evan Morrison by Rob Dumouchel of Rob Aquatics.