The Even-paced Battle Of The 12-Way Warriors 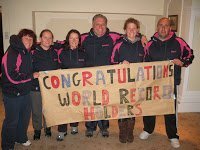 With the water and air dropping down below (10°C) in Windermere, England, his mentality served him well.

From 7:30 pm on Friday, May 27th to Monday evening on May 30th, the group of six swam through rain, winds (up to 35 knots), nightfall, winds and nothing like the likes of Windermere has ever seen. They were remarkably well-paced.

The Gladiator explained the process of swimming on and on in one-hour increments, “Towards the end of every swim, we would be looking for the next team member to appear at the back of the boat so we knew we only had another few minutes to suffer. After every swim we got out feeling cold, speech slurred in some instances, and after 5-10 minutes started to shiver. We got changed as quickly as possible, sometimes assisted by other members of the team when the hands were so numb and shaking was uncontrollable, whilst another member of the team prepared the long awaited warm drink. The dreadful weather put an halt to the usual cheering of team members as by the time you had warmed up (usually between 1 and 2 hours) nobody really wanted to go and get wet and cold again, well at least not before their next swim.”

“With only two lengths remaining, this was a very emotional part of the swim for team captain, Dee and a few tears were shed as the realization kicked in that the team was going to achieve their dream. The sun made an appearance and things started to look up as we approached the end of the eleventh leg.”

The eleventh leg – maintaining their incredible even-paced swim – was completed in 6 hours 24 minutes.

“With normal Windermere conditions in our favour, everybody dug deep to give everything they had left for their final hour swim and we completed it in 5 hours 54 minutes.”

At 10:32 pm, Sharples had only a few minutes to swim after the changeover with Liane before she reached the finish to set the new record of 126 statute miles (202 km) in 75 hours 32 minutes 32 seconds. Their effort out-did their American and Mexican relay counterparts by 16 km.

Nothing was easy. “The organization behind such a challenge was phenomenal and something that Captain Dee ‘Madfish’ Llewellyn and The Gladiator spent many hours working on. Throughout the swim there were still on-going changes being made to the plan, supplies being ordered and communication to land based officials to coordinate changeovers of our backup team. We are indebted to Ken Birchill of the Hydro Hotel on his boat the Hydro Therapy and the many very experienced skippers that he organised together with all the kayakers, rowers, observers, Andy Wright who manned the British Long Distance Swimming Association rib and the land-based officials of Pat Llewellyn and Jean Wilkin-Oxley who helped us all the way through the three storm systems and who never doubted our abilities.”