Everyone Who Swims Across Lake Cane Is Certainly Lucky 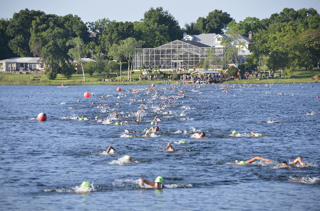 Lucky’s Lake Swim has been a staple event for not only Central Floridians, but for many Americans, Olympians and international visitors from 50 countries over the past 25 years.

“It was great partnering with the Historical Society,” said Dr. Lucky Meisenheimer, namesake of the event in Lake Cane and the daily phenomena of swimmers at his estate. “If there are any race directors who are interested about the process [of being recognized for historical relevance], I am aways happy to share information.

We had around 600 folks show up for Lucky’s Lake Swim on May 9th including 474 swimmers who did the swim that morning. It was a hoot
.”

While 474 swimmers appearing at one’s house might upset a few, overwhelm some and enthrall others, he literally opens up his doors on a daily basis to swimming from around the world. “We had over 1,400 swimmers visit our house for swims in May. Of course, there are many repeat swimmers, but we are averaging around 1,000 visits per month during the warmer months.”

Imagine hosting over 10,000 people over your home for a swim in your backyard? Year in and year out, without fail and with a smile. That is the epitome of an open water swimming aficionado.

Of course, not many people have a nearly circular lake, legal paperwork, swim caps, safety floats, a boating dock, and showers ready to go in their backyard either.

But Lucky has created the largest single open water swimming event in the Americas, if an event is defined over a multiple day period. Except Lucky’s event is 365 days per year.

Lucky’s Lake Swim has brought together people from around the world with a common cause and a common goal: to swim across the natural spring-filled waters of Lake Cane as a great way to start the day in Orlando. “I showed up one day before dawn and the regulars took me in like I had been swimming there for years,” described Steven Munatones, a first-time visitor from Huntington Beach, California. “I wasn’t quite sure where to go, but I just followed the directions on my phone. Before sunrise, the area of Lake Cane was perfectly tranquil and the lake was flat, bordered by elegant homes.

I parked in Lucky’s wide green lawn as the local regulars were also pulling in. The muffled sounds of swimmers getting out of their cars with their swimming gear and towels were reminiscent of swimmers heading towards pools around the globe. In the darkness, I could make out the “swimmer’s shuffle” with eyes peering forward, parkas on with backpacks and towels slung over their shoulders. As everyone walked slowly to the lakeside, ducks and dogs greeted us.

After I signed a waiver and grabbed the requisite swim safety buoy, I put on my bright green swim cap and was ready to go. Except I had no idea where to sign in the dark. The locals described the course and pointed across the lake. ‘Head toward the light,’ they instructed. 500 meters across the dark expanse of the lake was a small boat dock with two lights.

The freshwater was cool and sweet-tasting – and flat as can be. The two lights across the lake shone brightly like a pair of North Stars in the horizon

And anyone who swim across the lake is certainly Lucky.