Expanding The Beautiful Swim Around Charleston 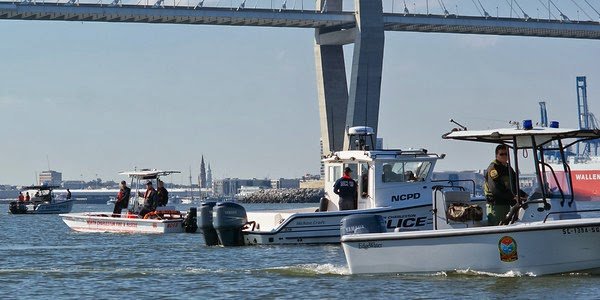 Great swimmers, great locations, and a great challenge are the formula for an outstanding open water swim.

Penny Palfrey*, Charleston and a 12-mile (19.3 km) circumnavigation is the formula for the 2014 Swim Around Charleston (SAC) held on September 21st.

“The best benefits of open water swimming are the travel and the opportunity to see new places and meet other swimmers,” describes race director Kathleen Wilson.

When that new place is Charlestown, voted the number one city in the United States and the world by the Condé Nast Traveler and Travel & Leisure, the swim takes on an entirely new level of expectations. Pioneered by Wilson, the Swim Around Charleston is an up-and-coming jewel of the open water swimming community.

The event is a warm-water, tidal-assisted swim that crosses the shipping channel of the port town, meanders around a historical American city up the Ashley River to its finish. “It is perfect for a swimmer new to the sport or a highly experienced open water swimmer looking for a relaxed course with a beautiful view and perhaps an extra couple of days exploring and eating one’s way around a spectacularly gorgeous city voted No. 1 in the United States three years running,” explains Wilson, one of the most experienced marathon swimmers in America.

“This highly walkable, safe city with its beautiful and historic homes and gardens is the perfect cure for achy shoulders following the swim.” It is a haven for foodies and those who enjoy seafood and a vibrant night life.

“In its fourth year, SAC is my creation. I’m 50-years-old and a long-time, highly experienced marathon swimmer. Having been a part of the marathon swimming world since 1997, I single-handedly introduced Charleston and the state of South Carolina to a sport in which no one had ever participated.”

Fast forwarding to 2011, the Swim Around Charleston was born.

“I deliberately kept the swim low-key initially. It was very important to me to run a good, safe swim and to be sure that I was a good race director first. I had tremendous knowledge of what swimmers need to know and the resources that they required for a quality swim so while keeping numbers fairly low those first few years, I was able to sell the swim to safety agencies including the U. S. Coast Guard with no push-back and quietly garner support from them as well as other local partners necessary for a successful event. Once again, I was breaking completely new ground for South Carolina.”

The Swim Around Charleston is open to solo swimmers, all of whom have a kayak escort and to a limited number of two- and four-swimmer relays. “Relays are limited due to the task of finding boaters willing to host a relay for the day. It is helpful if solos can provide their own paddlers however SAC will find paddlers and rent kayaks for those in need of support.

SAC has attracted between 17-30 solo swimmers during its first three years, but I see that field growing substantially as well as attracting an increasing number of younger swimmers. SAC has drawn most of its entrants from swimmers in their 40’s and 50’s likely due to the wide publicity that Charleston receives within the tourism world and that age demographic as well as previous swim publicity coming from United States Masters Swimming. Looking at the existing swims in the USA, the southeast is surprisingly bare, especially along the southeastern coast. There are few swims and no 10+ mile swims. SAC fills a nice void and it is time for the swim to expand.”

Similar to fellow musician and marathon swimmer Carina Bruwer in South Africa, Wilson successfully juggles several lives simultaneously. “The changing winds of those lives have led to a yet a new direction for the Swim Around Charleston and for me.”

Her dedication to her profession and to her sport is impressive. “I trained alone, every workout for ten years during which time I became an early member of the Triple Crown of Open Water Swimming as well as completing other great swims. I learned my sport from scratch, before online resources with the help of a young age group coach, now an attorney who agreed to work with me. My husband took the time to learn how to crew and together, we caught the attention of the entire region. We also casually commented on how much fun it would be to create a swim in Charleston.

In addition to training for and swimming the most prestigious marathon swims in the world, Wilson served as the Principal Harpist with the Charleston Symphony Orchestra. After a brief shut-down a few years ago, the orchestra members and the Board of Directors voted to eliminate 12 of their colleagues’ jobs. “So after 24 years of service and one quick vote, my career was all but ended, reduced to an as-needed musician on occasions in which the orchestra needed a harpist.

I was told on several occasions that if I cared about music, I would cut out this silly stuff and devote myself entirely to the orchestra and music. That silly stuff, in addition to marathon swimming, was an elected councilmember with the City of Charleston, representing 10,000 residents in my district
.”

But nothing is silly about the serious nature of the 12-mile Swim Around Charleston.

* Both Penny Palfrey and Chris Palfrey will be participating in the 2014 Swim Around Charleston.