Expect The Unexpected In The High Seas 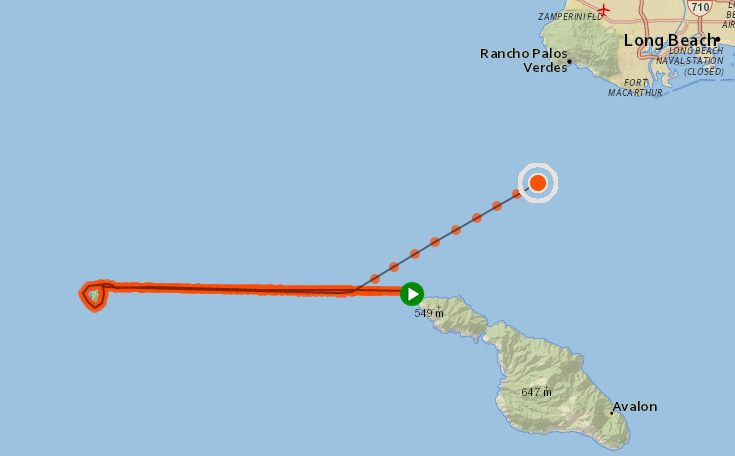 Course data and image of the Out, Around, and Back Relay, courtesy of Evan Morrison.

There are many, many reasons for a swim to result in an uncompleted mission – mostly to do with marine creatures or the marine environment.

But in the world of open water swimming, athletes can always expect the unexpected.

And that was certainly the case with the Out, Around, and Back Relay or the Old and Cold Relay attempting the first 53.8-mile (86.5 km) Catalina Island-to-Santa Barbara Island-Catalina Island crossing.

With Anthony McCarley just finishing his hour-long leg cruising along, the Old and Cold Relay was an estimated 5 miles or 2 hours away for their goal of reaching land on Catalina Island.

But, the team was hit with a decision to DNF by a dryland decision. “We are stunned; [the relay is] not complete. [We had] five miles to go, [but] the boat owner called off the swim for a fishing charter,” reported McCarley on Facebook. “We were cranking. I had just finished a leg where I did 2.7 mph, obviously with a current. [We were] two hours away [from the finish and stopped for a fishing charter.”

They were reported shocked and stunned beyond words – as were their fans, supporters and families on dryland. Some of their supporters called for legal action in an issue that is sure to cause discussions – and possible changes – among the governing bodies servicing marathon swimmers attempting swims in the Channel Islands.

Although the messenger was escort pilot John Pittman, the decision to call off the swim and request the escort boat to head for port was made by the new [unnamed] owner. “John is a good guy and has built a good business around [Catalina Channel] swimming as the [former] owner of the Outrider. But as of just a couple months ago, he is no longer the owner,” reported McCarley.

So the Old and Cold relay is currently heading to port and just regretting the “could-have, should-have, would-have” scenario that they unexpectedly faced on the high seas off Santa Barbara Island and Catalina Island.

Tracking of the relay by Evan Morrison was reported here.

Tags: and Back Relay, Around, Catalina Island, John Pittman, Old and Cold, Out, Santa Barbara Island