Expect The Unexpected, Parcours 2km Pro Am In Magog 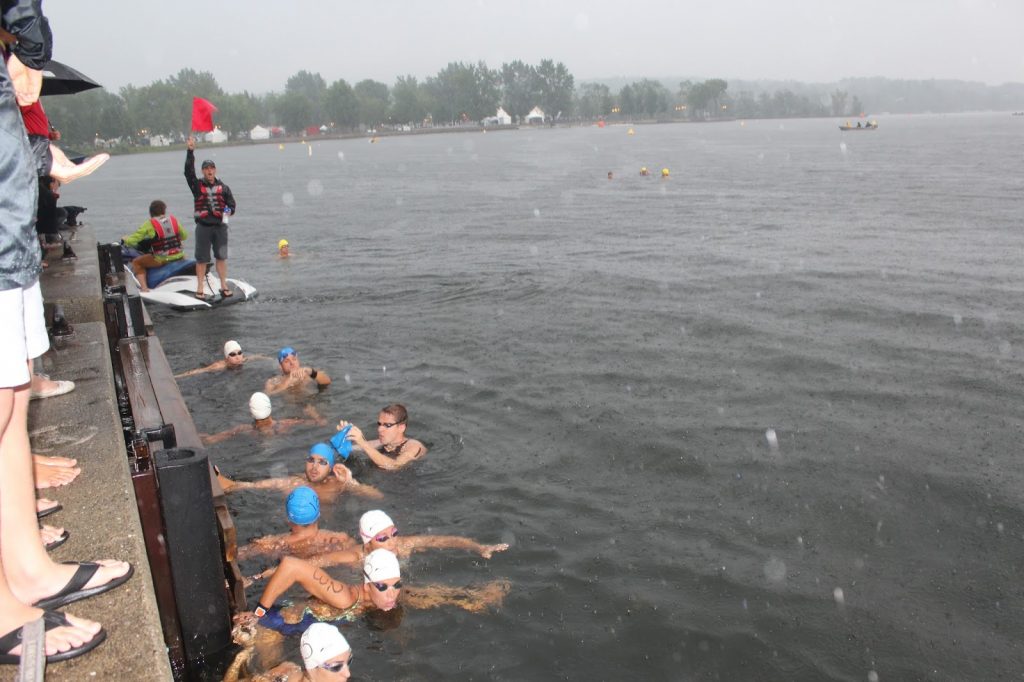 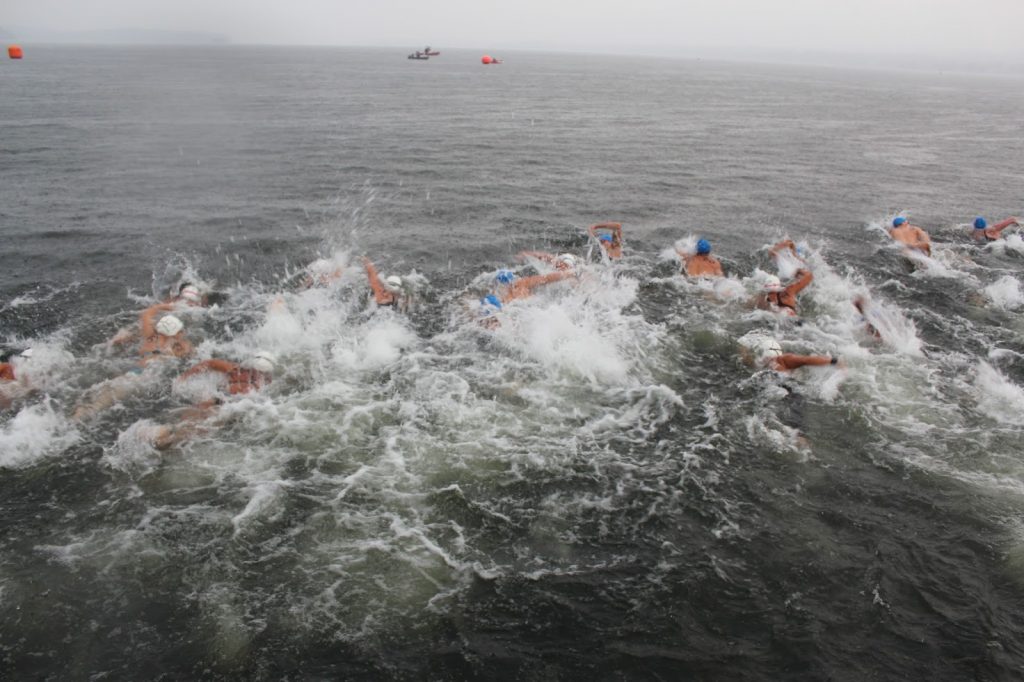 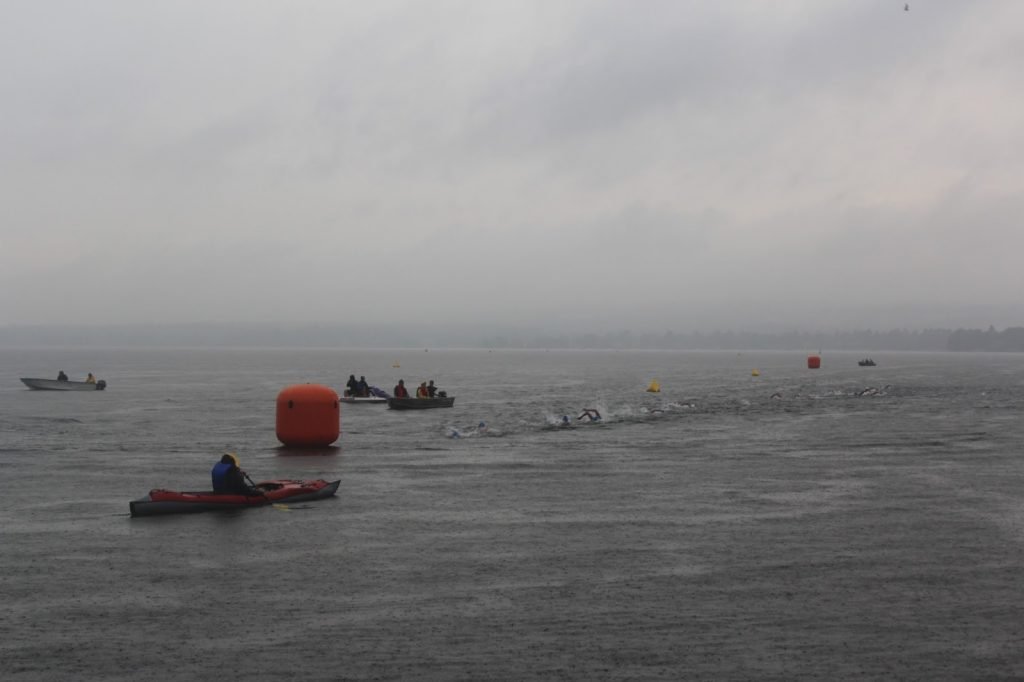 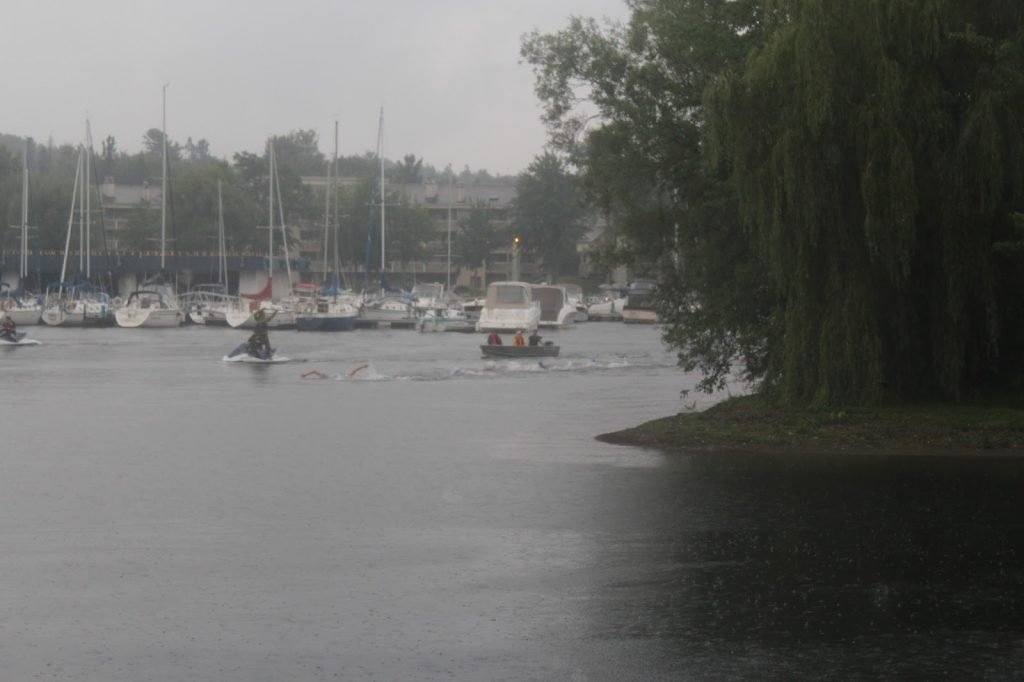 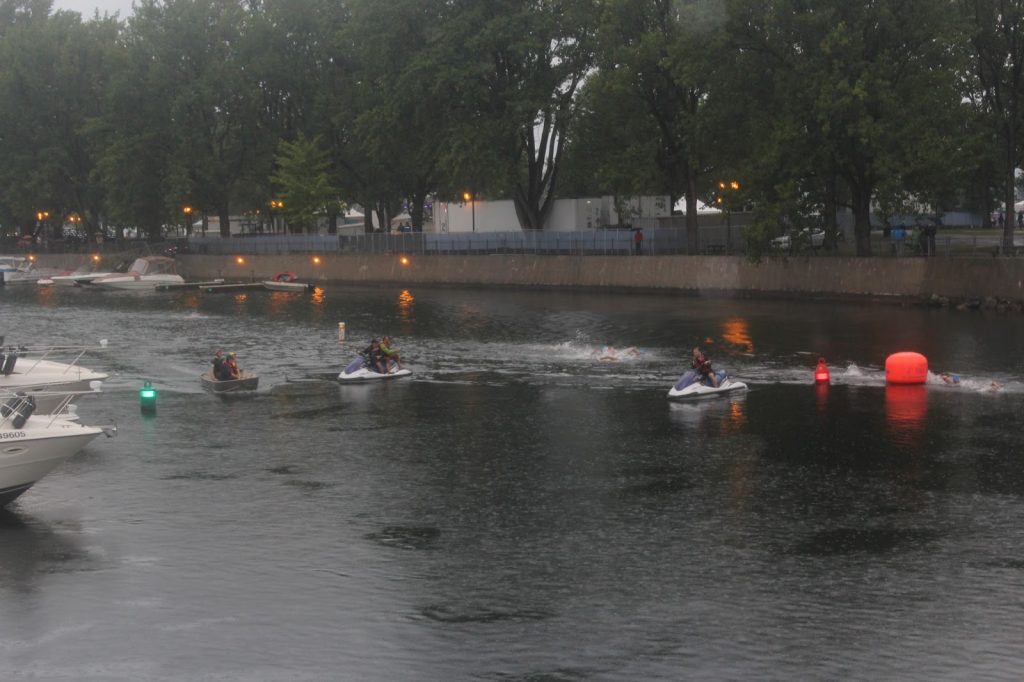 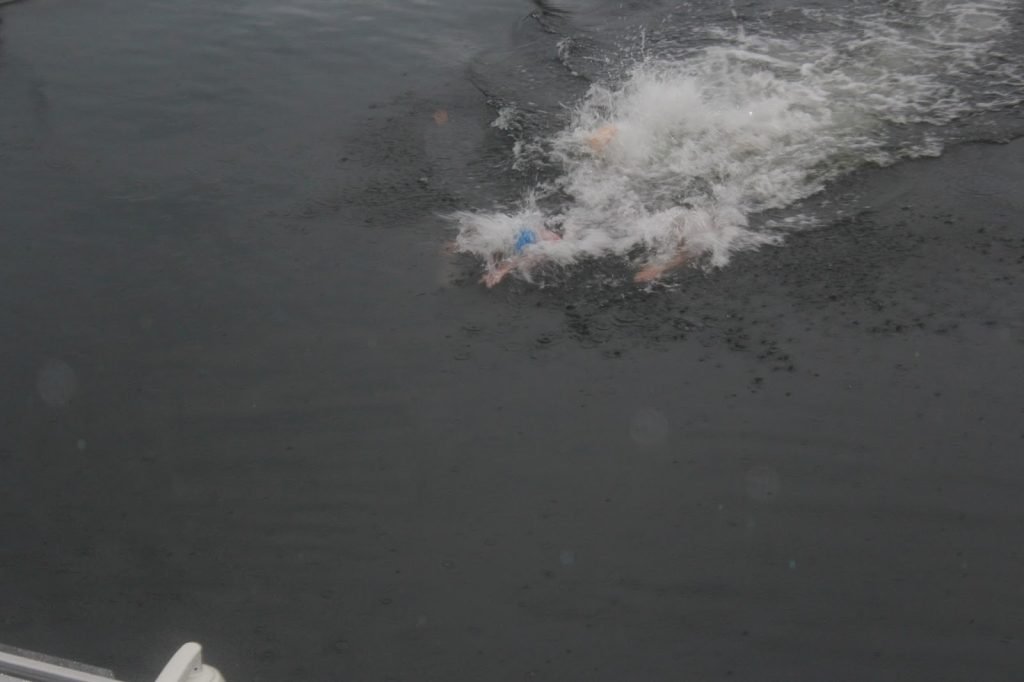 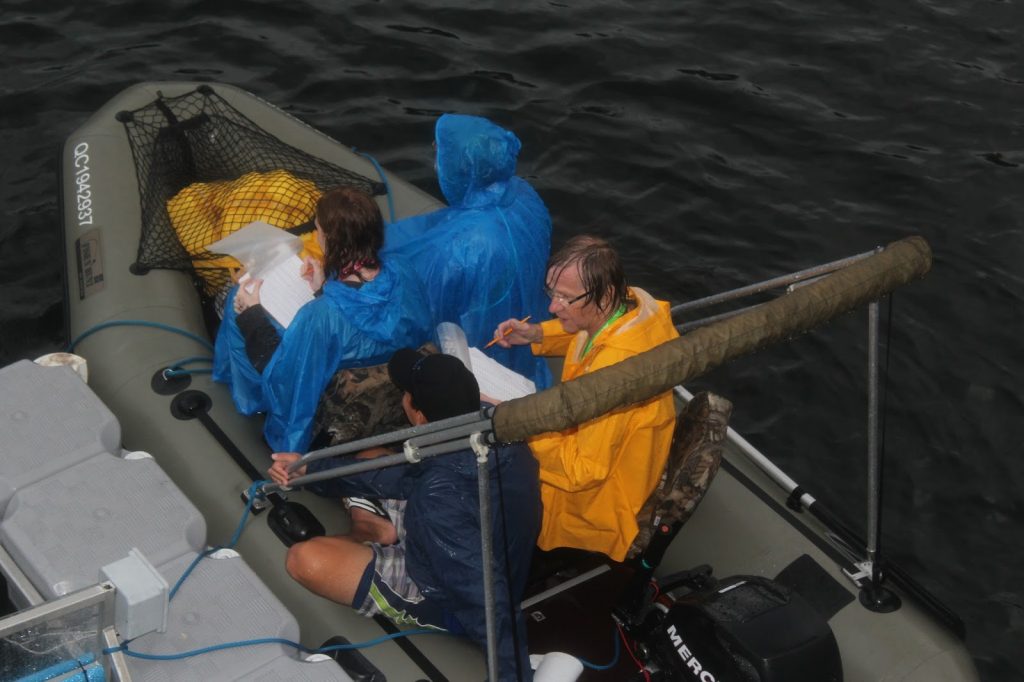 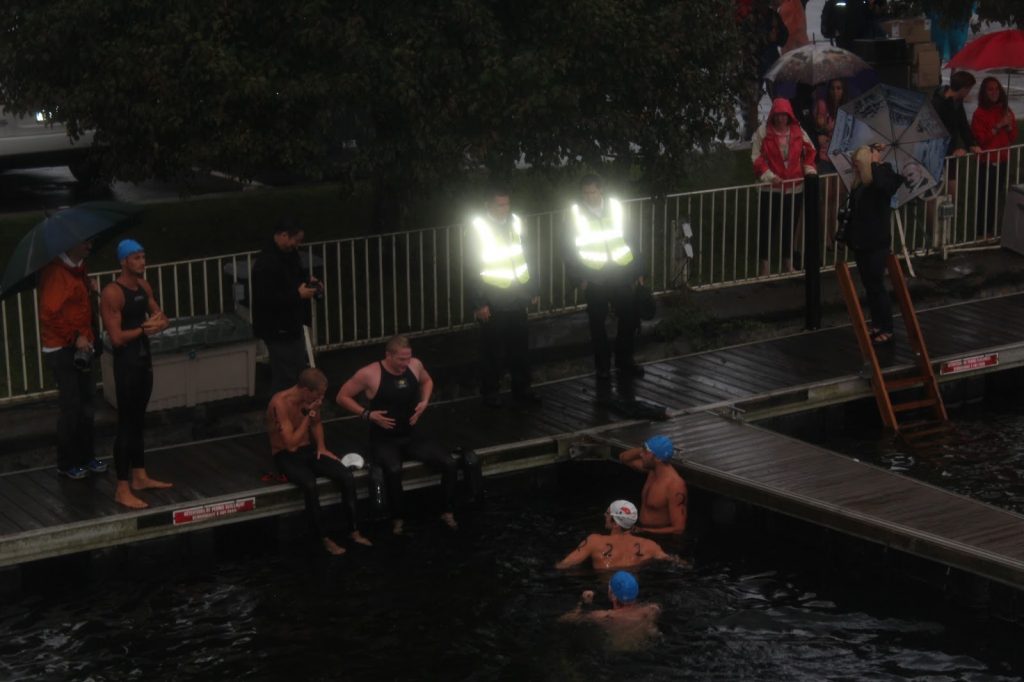 At this evening’s sprint race at the Traversée Internationale du lac Memphrémagog, the most impressive thing about the professional marathon swimmers was their sense of calm and camaraderie.

With the skies opening up with rain and lightening bolts striking down from the clouds, the young clan of competitors simply hunkered down in the tent area and chatted, texted, and mellowed out.

When the lightening caused delays, there were no complaints or criticisms from the athletes or coaches. They accepted the raging elements with a reluctant acceptance of seasoned veterans. And they came up with solutions to problems caused by the deluge.

The sprint race was 2 km of triangular twists and turns, around turn buoys and islands, along the lakeside and down the river. Designed to generate interest in the main 34 km race on Saturday, the sprint race is always a nice prelude to the marathon swim. But this sprint race was one of the most complicated courses possible – enabling spectators along the shore to appreciate the stamina and speed of these young athletes.

Along the course, there was a straight-away start, a double triangular loop, a U-turn around an island, and an downstream sprint down a river. There were 9 separate changes of direction in the 2 km course, requiring the athletes to swim in all four directions (north, south, east, and west) while making all different types of turns.

If there were any race that called for a high navigational IQ, it was the Parcours 2 km Pro Am sprint race, 2 days before the Traversée Internationale du lac Memphrémagog.

While Martina Grimaldi handily won the women’s division, the race was fast and extremely competitive among the top men. Jarrod Poort of Australia just out-touched Richard Weinberger of Canada. Poort had just flown from Australia to Canada as a replacement athlete in the 34 km race. And he meant business after finishing fifth in the 5 km race at the recent FINA World Championships.

“The pace was really quick,” recalled Alexander Studzinski who was with Poort, Weinberger, and Simon Ercoli of Italy until the very end. “Those guys were really moving, and we have a 34 km [race] to do on Saturday.”

With such speed demonstrated over the 2 km course, Saturday’s race is really shaping up to be a strategic battle against the wily ultra-marathon swimming veterans like Studzinski and Damian Blaum against the young upstarts like Poort of Australia just out-touched Weinberger.

The staff and the volunteers went out of their way to safely organize the race in the deteriorating conditions. “I thought we might have to wear glow sticks out there,” said Blaum who had accompanied his friend Trent Grimsey on his record-setting English Channel crossing.

Results of the Top 3:

As Mother Nature would have it, the rains abated soon after the last swimmer entered the finish chute and the swimmers rolled off to bed and a day of rest before their 34 km race on Saturday starting at 8 am.