Extending Oneself For A Better World 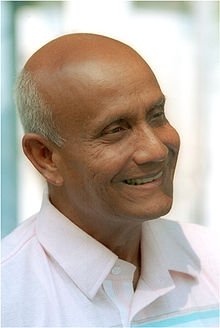 In celebration of the legacy of Sri Chinmoy, an Honour Administrator in the International Marathon Swimming Hall of Fame, the Sri Chinmoy Fitness and Weightlifting Anniversary will be held on August 27th.

“This year marks the 30th Fitness-Weightlifting Anniversary of a true pioneer in spreading fitness to millions,” explains Vasanti Niemz.

“Over 1,000 of the members of our International Sri Chinmoy Marathon Team and the global Peace Run which he founded in 1987 will be in New York for a series of athletic, spiritual and cultural events, plus sharing ideas for how we can do more.

Sri Chinmoy’s message is that each one of us can do more and better in every field of our lives when we dare to have faith in our own unlimited capacity.

Sri Chinmoy took up weightlifting in 1985 at the age of 54 because of a knee injury which made it very painful for him to continue his favourite sport of running. In just over 18 months, he progressed from lifting 40 pounds to his world-famous 7063-pound one arm lift. Sri Chinmoy kept transcending in many creative ways until his passing in 2007

As a personal challenge, Sri Chinmoy often observed his weightlifting anniversary with an evening of non-stop lifts. One evening in 2004, at the age of 73, he lifted more than 100 tons of weight in various disciplines – 200,873 pounds total.

Sri Chinmoy once said, “The word impossible is only in the mind and not in the heart. If we can remain in the heart, there will be no end to our progress.”

“Because of Sri Chinmoy’s tremendous enthusiasm and great spiritual height, there were no limitations to what he could achieve. He certainly inspired me in my running and jumping to go far beyond what I thought I could do and to be the best that I could be,” recalls 9-time Olympic champion Carl Lewis.

“Sri Chinmoy’s philosophy of individual peace begetting world peace marks one of our truest possibilities for achieving lasting peace. And his philosophy of self-transcendence is one that I hold dear to my heart as well,” said tennis champion Billie Jean King.

“Sri Chinmoy’s lifting of me came before I broke some of my world records. He lifted me not just physically as part of his special award, but also inwardly many, many times,” marathon record holder Tegla Loroupe.

“I entirely endorse the idea of the Peace Run which was started by Sri Chinmoy: to create a more harmonious and a more friendly world for all, through running together for world harmony,” said 2-time Olympic medalist Paul Tergat.

“Sri Chinmoy was not only pushing his own boundaries beyond what was thought physically possible throughout his life, but more importantly, also inspired others to extend beyond their own self-imposed limitations. What he did after the age of 50 was a precursor to the many extraordinary feats of aging Baby Boomers in the 21st century. He accomplished the impossible and motivated others to do the same, leaving a remarkable, lasting legacy. When people are focused on achieving feats of stamina and strength on land and in the water, their collective energy leads to a truly more peaceful world,” says KAATSU Global co-founder Steven Munatones.