“To all who finished: well done. To those who didn’t, don’t worry, Robben Island is going nowhere. It was a great effort. Don’t give up. Come back and tame this crossing,” said Cadiz Freedom Swim Chairman Ram Barkai.

“The conditions were very deceiving. It was calm and sunny with a (relatively) hot start (13.2°C). Little did we know the temperature would drop constantly and forget to rise towards the end. Then there were swells and a strong current.” 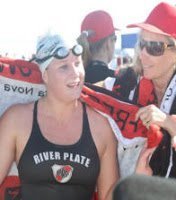 “This was an event of epic proportions and a race of extreme conditions,” said Craig Craig Doonan of the 7.5K swim in Cape Town, South Africa from Robben Island to Big Bay. “It was an incredibly challenging swim.”