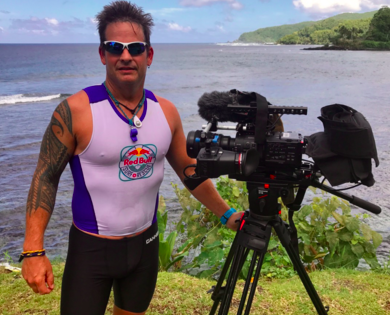 Faaaloalo i le vasa means “respect the ocean” in the Samoan language.

It is the specific messaging of the Blue Journey Dangerous Wave Project, the brainchild of Bruckner Chase.

The concept is the theme of Chase’s educational film series that is currently in post-production as a result of a partnership with the National Oceanic and Atmospheric Administration’s National Weather Service and Ocean Today.

The project combines an impactful, practical film series that is meant for all individuals – swimmers and non-swimmers alike – who visit the coastlines around the world. Chase also created a public outreach initiative, delivered via free clinics and public talks that are augmented by partnerships with corporate sponsors, community groups, schools and environmental organizations.

“The National Oceanic and Atmospheric Administration and its National Weather Service has always provided a vast amount of beach and water safety and science information for the public,” described Chase. “We are now working to make it more engaging, user-friendly and community relevant to beach-goers and those who enjoy marine sports.”

The short films and presentations are focused on beach and ocean safety. “Situational Awareness is our goal in, on or near open bodies of water.”

The primary film series components of Surf Zone Safety will provide specific advice for the beach and marine environments in American Samoa and the East Coast, Pacific Northwest, Southern California and Hawaii in the United States. Along with longer educational pieces, Surf Zone Safety will expand on the message and science and will be available free to anyone in the world as part of NOAA’s Ocean Today Full Moon initiatives at oceantoday.noaa.gov.

Back in 2013, Chase’s Ocean Positive Foundation produced a short educational documentary with NOAA National Marine Sanctuary Foundation that focused on the inspiring stories and challenges faced by the communities of American Samoa. That innovative Blue Journey project looked at the role of surf lifesaving sports and training as opportunities to create place-specific protection and safety programs. Dial forward four years and now Chase is the writer and host of the new NOAA National Weather Service film series that visits coastal communities and locations throughout the country.

The NOAA Ocean Today project finished filming in September in American Samoa. “I continue to explore ways to continue contributing to empowering people to enhance the safety, well-being and health of everyone in the community.”