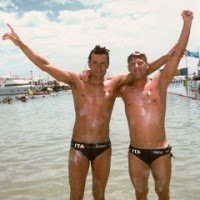 Like many generations of marathon swimmers before the era of the Olympic Marathon Swimming 10km, Fabrizio was born just a bit too early.

Open Water Source asked Fabrizio some questions about his career:

Open Water Source: Do you wish to have been born 10 years later so you can participate in the Olympic 10K Marathon Swim?

Fabrizio: Of course I would have liked to be born ten years later to participate in the Olympics Games, it is certainly the dream of all athletes. The 10 kilometer was one of my favorite races in 1995 when I won the title of the Italian Championships.

Open Water Source: Can you tell me of your world championship race from the 1990s?

Fabrizio: It was a fantastic experience. I was lucky to be able to have raced in Perth, Australia in 1998, the home of swimming. I competed in front of more than 20,000 people. The main race was the 25 kilometer, a very charming specialty where in addition to the skill, the power, swimmers must also make the right tactical decisions.

Open Water Source: Do you still swim? Do you participate in masters races?

Fabrizio: Yes, now I’m swimming for a masters team in Venice, my home town in Italy. The name of the team is Rari Nantes Venezia; its President is Gianni Zanardo. This year, I won my masters division of 35 years old in the 1500 meter freestyle in the open water. In Italy, we have three official races for Masters in open water: 1500m, 3000m and 5000m.

Open Water Source: Italy has a great tradition in open water swimming. What is it like to be a member of the Italian National Open Water Team?

Fabrizio: It is true. We have a big tradition in Italy for open water swimming, All the athletes on the team are very strong in the pool. I also did 15:40 in 1992, my personal best in 1500m [in the pool]. Around 20 years old among the strongest athletes at the national level in the pool, these are the athletes who go to swim in open water. We are like the “dream team” and I’ m very proud of this! The Italian Federation believes strongly in open water swimming.

Open Water Source: What were some of your greatest memories of the international competitions that you did?

Fabrizio: The victories with the Italian Team at the European Championships in Siviglia, Spain in 1997 and the World Championships in Perth, Australia in 1998, these are the moments that cannot be explained. Humanly speaking, I have met a lot of people around the world. Now I know different cultures and I have a lot of friends.

Open Water Source: What were some of your hardest workouts when you were training at your peak?

Fabrizio: At my peak I did 20-21 kilometers per day with 3 hours of training in the morning and 3 hours in the afternoon. One day I remember I did 8 x 1500m at a 17:30 interval, obviously with the rest