Next week, Trent and Codie Grimsey may make their parents particularly proud if they both qualify to represent Australia at the 2011 World Swimming Championships in Shanghai and then go on to the 2012 London Olympics.

The brothers, elder Trent and younger Codie, are both among the fastest open water swimmers in Australia and the world, but the road to the 2012 London Olympics 10K Marathon Swim is difficult. Having two Olympic 10K Marathon Swim finalists coming from the same household will be quite a story. 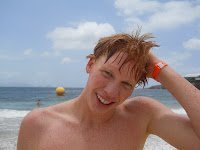 If there is a brotherly duo who can do it, it will be the hard-working Grimsey brothers. While the closely-knit brothers harbor the same deep-seated Olympic dreams and genetics, realizing their mutual goals will require two great swims at both next week’s Australian Open Water Swimming Championships in Sydney and in Shanghai at the World Swimming Championships in July.

The lead pack in Sydney will undoubtedly include Trent and Codie, but it will also include defending champion Rhys Mainstone from Perth and Australian legendary Iron Man and 2008 Beijing Olympian Ky Hurst.

Fortunately, bloodlines occasionally run deep in the open water. Not only have American Olympians Klete and Kalyn Keller proved themselves in the open water, but brother-sister duos like Tammy and John Van Wisse of Australia and Sid and Marian Cassidy of America have done well. Additionally, the International Marathon Swimming Hall of Fame has inducted individuals such as the British twins Carole and Sarah Hunt, father and daughter Robert and Christine Cossette of Canada, father and son Ted and Jon Erikson, and mother and daughter Freda and Alison Streeter. Family roots even extend out of the open water in the International Marathon Swimming Hall of Fame with Reg Brickell Sr. and brothers Reg Brickell Jr. and Ray Brickell as well as Roger and Valerie Parsons and Ray and Audrey Scott – as well as the Cavill Family of Fred, Ernest, Charles, Percy, Arthur, Syd and Dick. Of course, there is also the Lurz brothers: coach Stefan and world champion Thomas.

So while the road may be extraordinarily difficult, open water swimming’s DNA seems to be on the side of Trent and Codie.