Time after time after time, the winds, waves and currents sidelined the Night Train Swimmers in their quest to swim between the Farallones Islands and the California coastline.

But Vito Bialla and his crew of hardy men and women were not to be denied. They plotted, they trained, they stuck together – especially when the ‘fish’ came around. 14 hours and 45 minutes after starting under the Golden Gate Bridge, anchor man Dave Holscher finished at the South Farallon Island to achieve their goal. 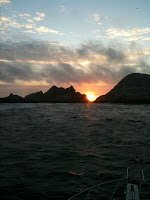 “It wasn’t easy,” summed up the relentless captain of the Night Train Swimmers about the swim known for its abundance of Great White Sharks. “We had Phil Cutti go first followed by Darrin Connally, Dave, myself, John Mathews and Kim Chambers. Phil [shown above] saw several ‘fish’ about his size circle and swim around him.”

“We think it was dolphins…maybe,” in what had to be the whitest lie this side of the Pacific. But Phil didn’t let his teammates down and stared back down at the ‘fish’ as he continued on.

It is the never-give-up spirit and teamwork of everyone involved that made this charity relay a success – and is exemplary of the passion of the most hardy of open water swimmers. 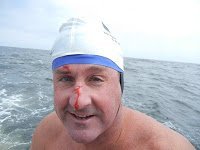 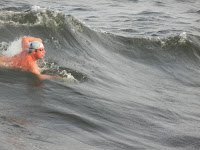 More photos of the courageous Night Train Swimmers here, a group of San Francisco-based swimmers who do a variety of marathon swims around the Americas to raise money for a variety of worthy causes.