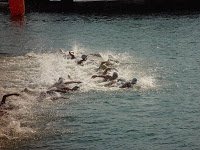 Like the men’s 10K race at the 2010 World Open Water Swimming Championships where Valerio Cleri of Italy bulled his way to the finish in 17°C (62.6°C) water in Roberval, Canada, the 5K race is going to stacked with studs. However, unlike the tactical 10K race where the men paced themselves in the first half of the race, we foresee the shorter 5K race having a longer finishing sprint.

It will be interesting to see if the men who did not compete in the 10K (e.g., Andrew Beato of Australia or Spyridon Gianniotis of Greece or Daniil Serebrennivok of Russia) have the power, stamina and speed to outsprint the men who exerted themselves on Sunday’s tough 10K championship.

The start list for Tuesday’s race is as follows: