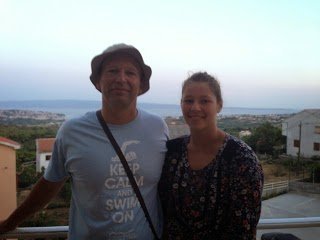 While Anastasia Krapivina of Russia comfortably won the women’s division over local Karla Šitić at the 16 km Faros Maratón in Croatia, there was another interesting race within a race.

This rivalry was father-daughter style.

This was Josip’s fourth Faros Maratón and it was Lucija’s second attempt. Last year, Lucija couldn’t keep up with dad: 3:52:15 to 3:56:45 with the good doctor 4 and a half minutes ahead. But Lucija trained with Olympic marathon swimming coach Slaven Šitić and turned the tables on her father. Before the race, coach Šitić predicted, “She will try to beat her father. The way she is training, Josip has no chance.”

A special mention must go out to Irene van der Laan who completed her 21 consecutive Faros Maratón at the age of 54.