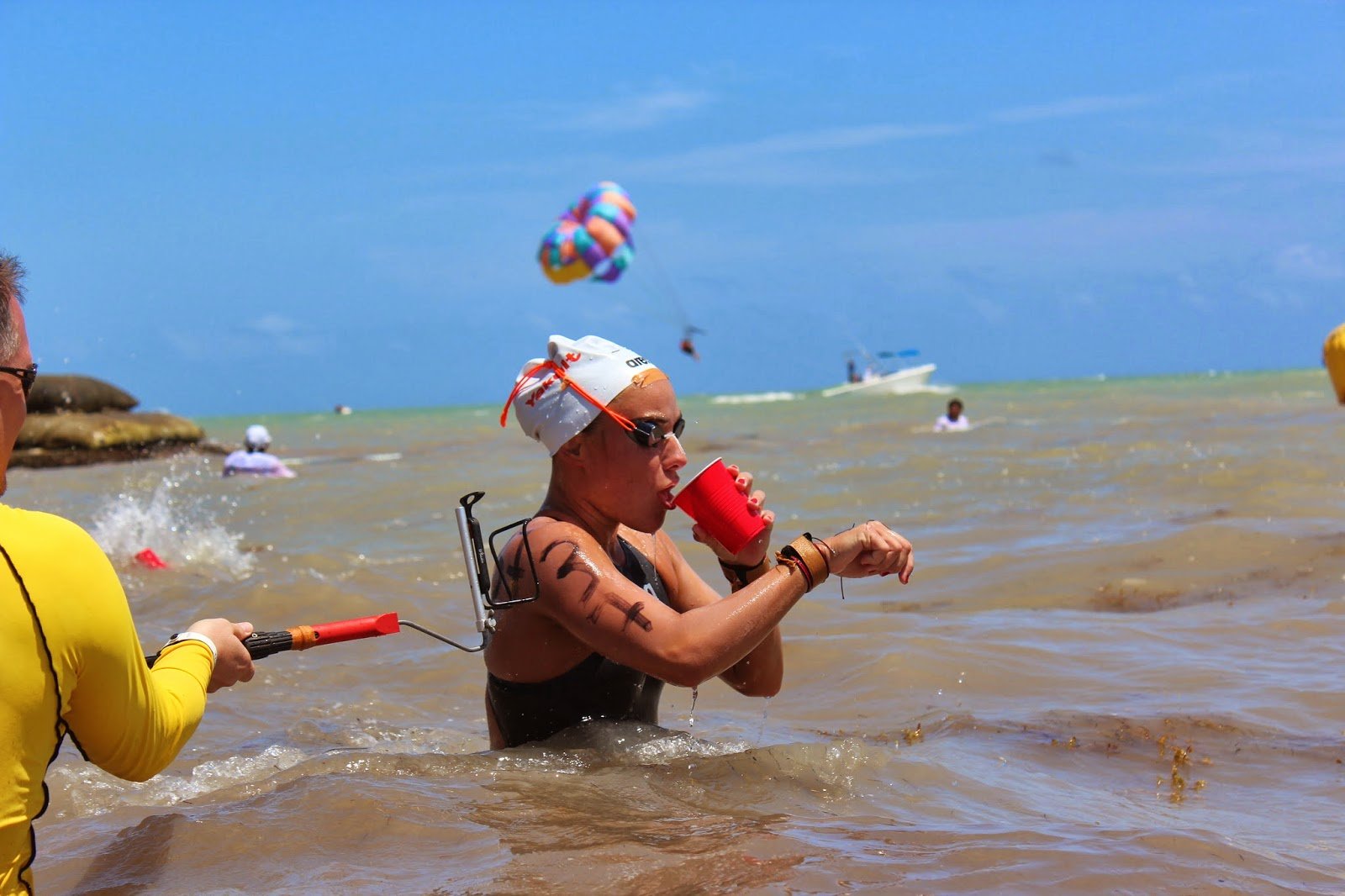 The World Open Water Swimming Association conducted a survey on what are open water swimmers’ greatest fears in the open water.

Swimmers from around the world emailed in the following responses:

* “SHARKS, SHARKS, SHARKS!”
* “It’s silly, but during every race I have at least one moment when I am terrified at the prospect that the Loch Ness Monster is in the water and somewhere near me. On a positive note it always gets me going a little faster.”
* “Large sharks, dangerous jellyfish, but I love the ocean and I like as it is“
* “Absolutely nothing I fear.”
* “Goggles fogging.”
* “Losing.”
* “Swimming in rivers and lakes with low visability. I have a fear about running into tree trunks, branches or other objects. I have no fear at all when comes to swimming in the ocean.”
* “Recreational water craft and lingering pieces of sky-lab.”
* “When others grab onto your legs.“
* “During my first open water swim…I was freaking out about everything and my time was horrible. Then I realized the biggest problem was “overthinking”, once I realized that the marine life is always there, the currents and sea conditions are what they are, and I know I can do well in these races, I was able to just put my head down and go. So that is why my biggest fear is Overthinking.
* “My suit might fall off.”
* “Not seeing where I am.”
* “Drowning.”
* “Boat traffic“
* “Things I can’t see in the water.”
* “Dark or murky water, not being able to see more than 3 feet around me.”
* “Swimming alone (I know I shouldn’t do it, but sometimes I have to).”
* “Currents are a middling fear – but not tides or waves.”
* “I train in the Nord Sea in Belgium or in rivers or lakes in Belgium and in the Mediterranean Sea in France. My chances to encounter sharks are quite low. If there would be sharks in these waters, that definitely would be my greatest fear.”
* “Jellyfish.”
* “Waves, currents or tides – all of these make swimming extra hard and challenging.”
* “Seaweed, which is not scary, but just annoying to swim in.”
* “Physical contact by competitors.”
* “Cold water.”
* “Boats!!”
* “…pain and being tired…”
* “Seeing the bottom.”
* “I used to be deathly afraid of the pelicans flying overhead. Those huge birds would dive, beak first, into the water, sometimes a few feet from me … but over time I just see them as old friends.”
* “I am afraid of the shark and being alone in the water.”
* “What are those whirlpools called? That kind of freaks me out.”
* “Actually I am so afraid of heights, and so the thought of how deep the water is tends to freak me out a tad.”
* “Meeting lion’s mane jellyfish with no possible way to get out of the road as there are more of them.”

Fears included all kinds of comments on sharks, jellyfish, stingrays, seaweed/kelp, pollution, waves, currents, tides, cold water, physical contact by/from other competitors, going off-course, unseen things in the water, “everything”, not seeing the bottom, and Vaseline or lanoline getting on their goggles.

1. At the 1991 FINA World Swimming Championships in Perth, Australia, Petranech was asked about the course on Swan River that emptied into the Indian Ocean near Fremantle and is reported to be the number one breeding spot for the Great White Shark. When asked by a swimmer if there was a possibility that a shark would swim up the river and disturb the progress of the race, he reassured him that there was no problem because ‘the Australian Salt Water Crocodile would eat the sharks.’

2. Petranech’s own Catalina Channel crossing started at night. With a spotlight from his escort boat shining on him, he noticed a large triangle that resembled a dorsal fin. Because the water was a bit murky, he could not see anything under the water. On my next breath, he noticed the triangular fin was still there. Fortunately, there was still nothing under the water. On his next breath, he discovered to his satisfaction that the triangle was being caused by my elbow on his recovery and the spotlight that was casting a shadow that resembled the fin. “I was afraid of my own shadow.”

3. On his record Catalina swim, world champion Chad Hundeby suddenly announced that there was ‘something big down there’, referring to a shark. The boat crew did see anything, but Pete Huisveld offered and advised that he would be happy to swim with him in an effort to relieve him of some of his anxiety. But Hundeby kindly refused the offer and bravely replied that “there is not much sense both of them being eaten.”