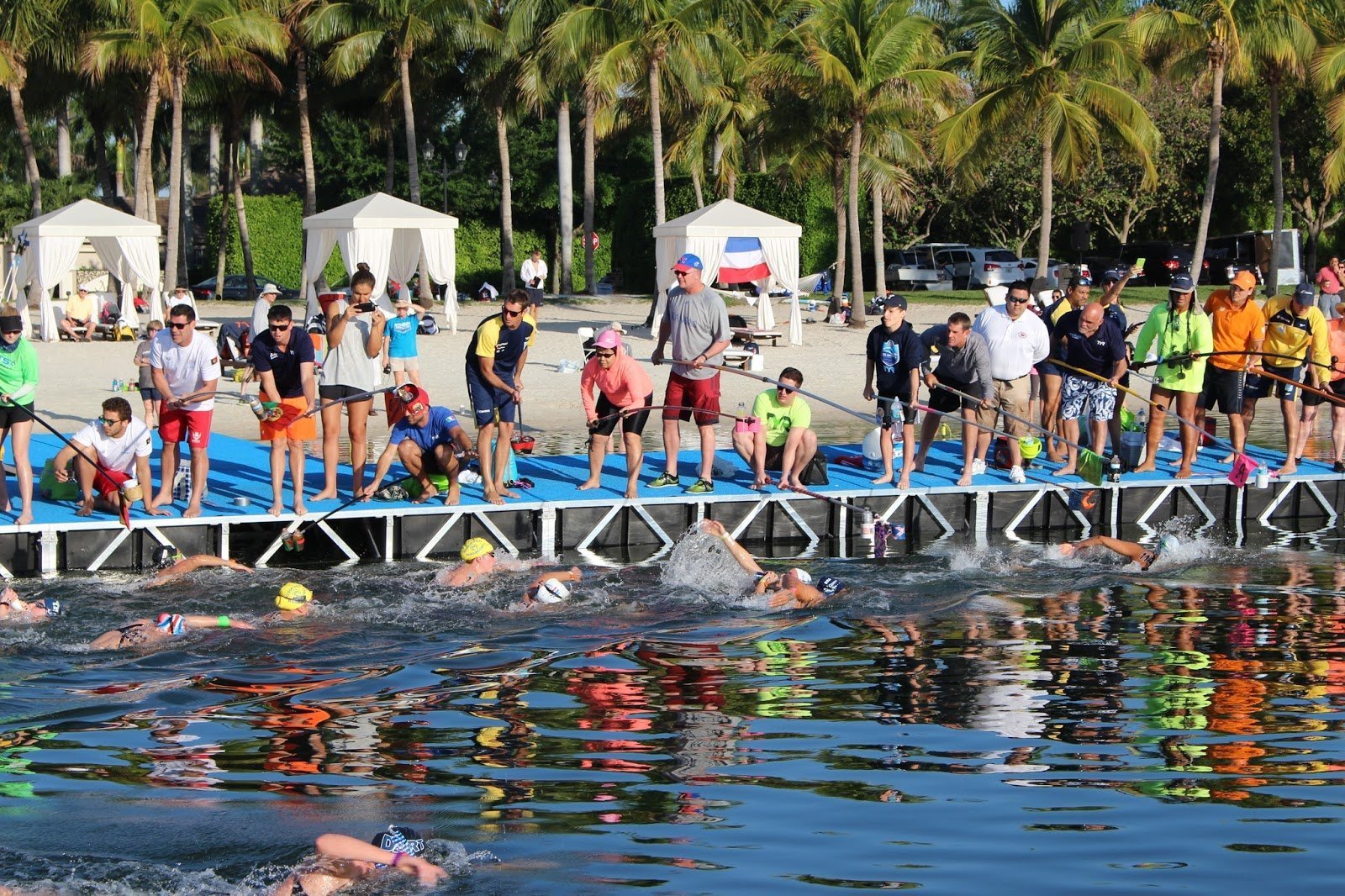 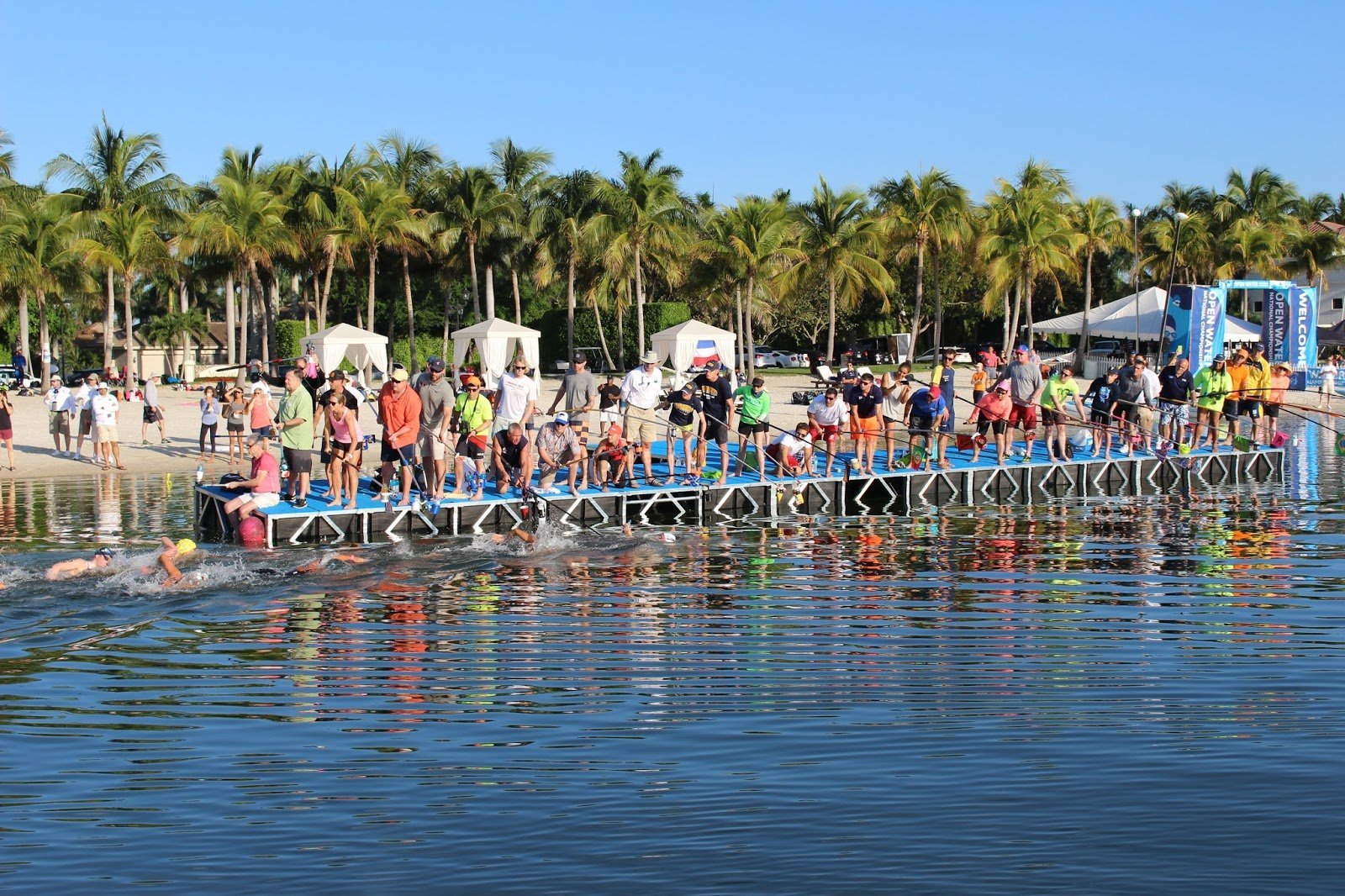 Where does one stand to feed open water swimmers at the Olympics or World Championships or any one of hundreds of marathon swimming?

It is all a matter of personal preference among open water swimmers and coaches. Some athletes prefer to be fed by their coaches in the beginning of the feeding platform while others like their coaches to stand towards the end of the pontoon.

Under commonly followed rules in domestic and international competitions, each athlete will be assisted by one coach of their choice. What is it that the coaches actually do? Why is it so important? Is there pressure on the coaches?

All these thousands of hours of devotion, strategizing, and coaching boil down to a race of less than two hours. And – at least for the coach – this 2-hour race boils down to a few critical seconds while standing on a (typically floating) feeding pontoon.

These drinks include as many concoctions and formulations as there are swimmers, but in highly competitive races, swimmers and coaches work to synchronize their timing perfectly. Any error in timing, any missed opportunity to fed, and the swimmer’s chances of medaling drops as a result.

As the coaches lean, kneel and stretch out as far out on the race course as possible, the swimmers veer off the straight-line course to cruise pass the feeding station. The swimmers have just one shot at grabbing their cups that are delicately cradled on the coaches’ feeding stick.

Unlike race car drivers who know where their pit crews are located, the swimmers do not always know exactly where their coaches are positioned until they see them on the first loop. As the swimmers fight for position coming into their first feeding, they expect the end of their feeding sticks to be slightly above the water’s surface, facing just at their preferred angle, so they can quickly reach up and grab their own cup without breaking their stroke rhythm. A missed stroke means losing valuable ground to their competitors where the difference between gold and bronze is often less than 2 seconds. If the coach-swimmer teamwork is successful, the swimmers reach up for their cup, roll on their backs, gulp their drink and resume swimming – all without losing momentum – within 2 seconds.

Like a Tokyo subway train, there is occasionally only so much space on the pontoon. In other words, the coaches have no more than 2 seconds to position their feeding stick at the water’s surface, hold and release the swimmer’s cup at the optimal position, and then retrieve their feeding stick without hitting any competitors. Unlike running marathons where there are frequent water stops along the race course and all kinds of volunteers and cups of water to aid the runner, the swimming marathoners have only a handful of opportunities to get fluid during a marathon swimming race. 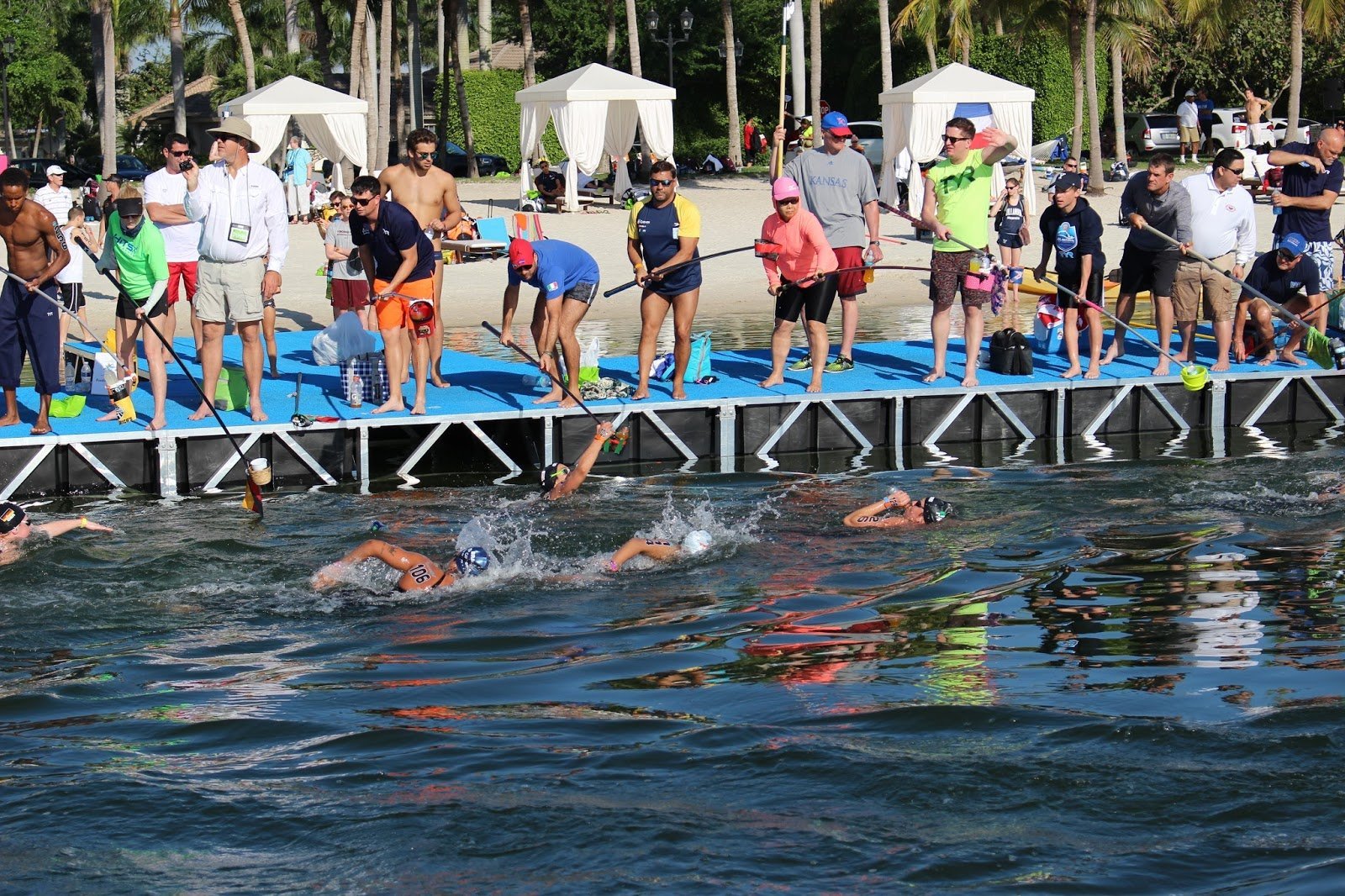 Despite the coach’s best efforts and years of experience, when a large pack of swimmers come flying into the feeding station together, the coaches face additional problems. Sometimes, swimmers may grab or inadvertently hit other swimmer’s feeding sticks or spill their competitor’s cups. In these cases, no apologies are made…both swimmers and coaches simply chalk it up to bad luck and poor timing.

Thirdly, when a very large group of swimmers heads towards the feeding station, all splashing and swimming very close to one another, the only thing that can be positively identified is a…very large group of swimmers splashing and thrashing close to one another. This can be especially true with men who often remove their swim caps during races in warm water. Occasionally, as coaches stretch the feeding stick out to the thrashing pod of athletes, they notice their swimmers are in a different position and swimming away from the feeding station.

Yet, an unwritten gentlemen’s code of conduct is strictly followed at the feeding stations because every open water coach knows that if he or she were to fall in the water and disturb another swimmer, his or her own swimmer would be immediately disqualified.

In other words, 4 years of standing on pool decks, 4 years of walking along shorelines, 4 years of plotting strategy, 4 years of traveling the world to competitions – and the coach’s best efforts can go up in smoke within 2 seconds.