Feeling Good And Why 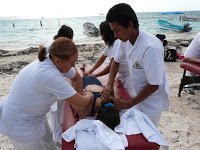 While massage tables are often found at the end of marathon runs, triathlons and some open water swims, the massage therapists and athletes often do not know the scientific basis for the benefits of human touch after an endurance event.

Athletes and therapists just know that these physiological and psychological benefits exist. This lack of data and scientific understanding led Dr. Mark Tarnopolsky of McMaster University in Ontario, Canada to conduct experiments on massage therapy.

Dr. Tarnopolsky authored a study on how massages act to reduce inflammation and allows muscles to adapt to exercise by researching its effects on human cells. In this study, Dr. Tarnopolsky performed muscle biopsies in both legs of healthy young men before and after bouts of strenuous exercise and compared his findings to a third time after massaging only one leg of each individual.

He found that massage helps in two fundamental ways at the cellular level:

1. It reduced exercise-related inflammation by reducing the activity of a certain protein (NF-kB).
2. It helped cells recover by increasing the amounts of another protein (PGC-1alpha) that in turn increases the production of new mitochondria (that are critical for muscle energy adaptation to endurance exercise).

Interestingly, the research found there was no effect by massages on lactic acid concentrations, one commonly held belief. The next step of research may delve into the most optimal massage methods and pressures to treat specific conditions and ailments.