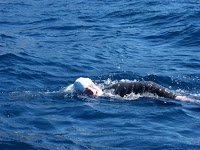 He completed the double-crossing of Lago Nahuel Huapi in 4 hours 45 minutes between the Port San Carlos and Neuquen. He had also competed in the 21K Villa Urquiza – Parana marathon race.

Even with a wetsuit, the former lifeguard and diver told reporters, “Along the way [in Lago Nahuel Huapi], I suffered quite cold with pain in my head, neck and neck.”