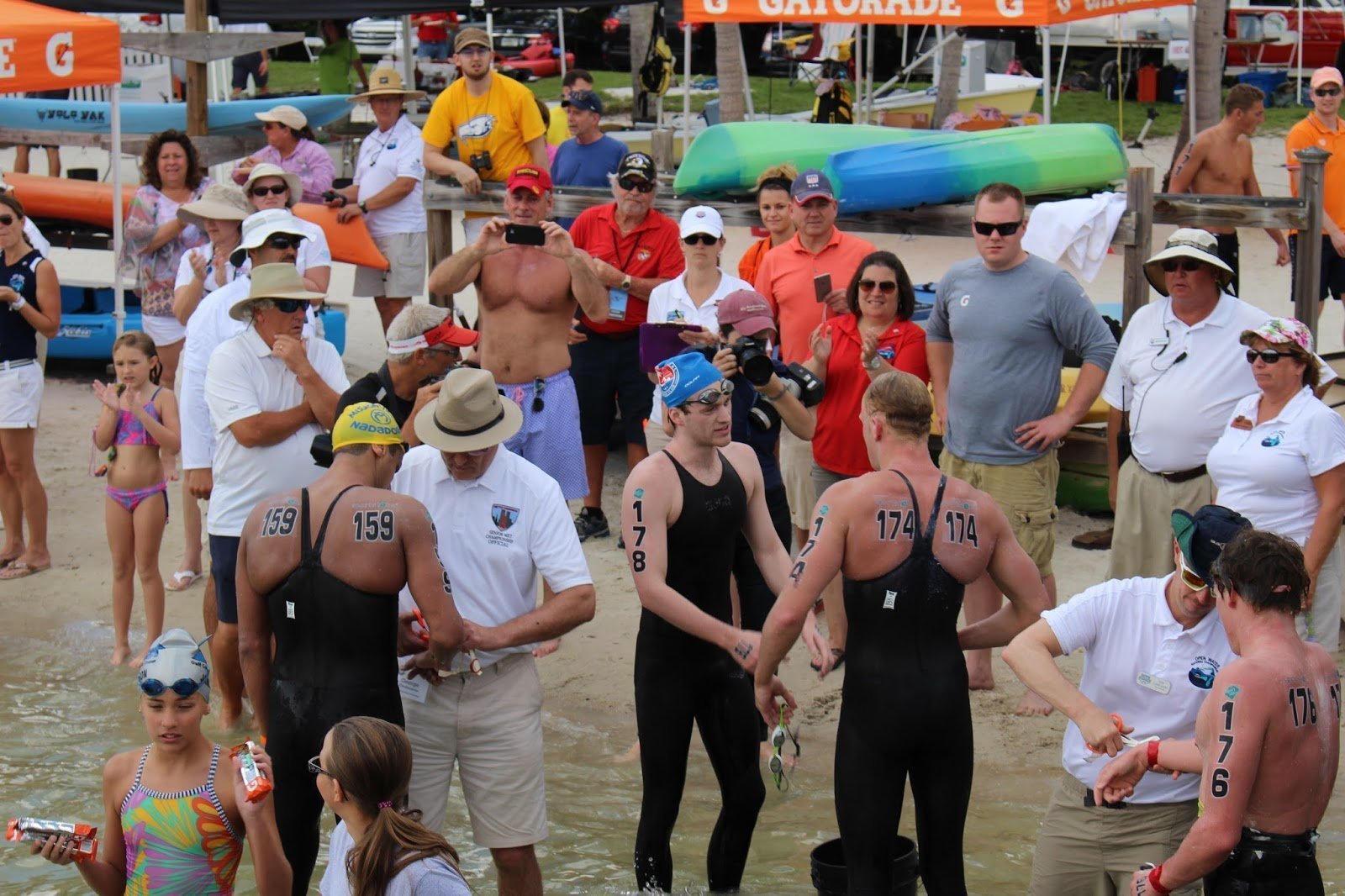 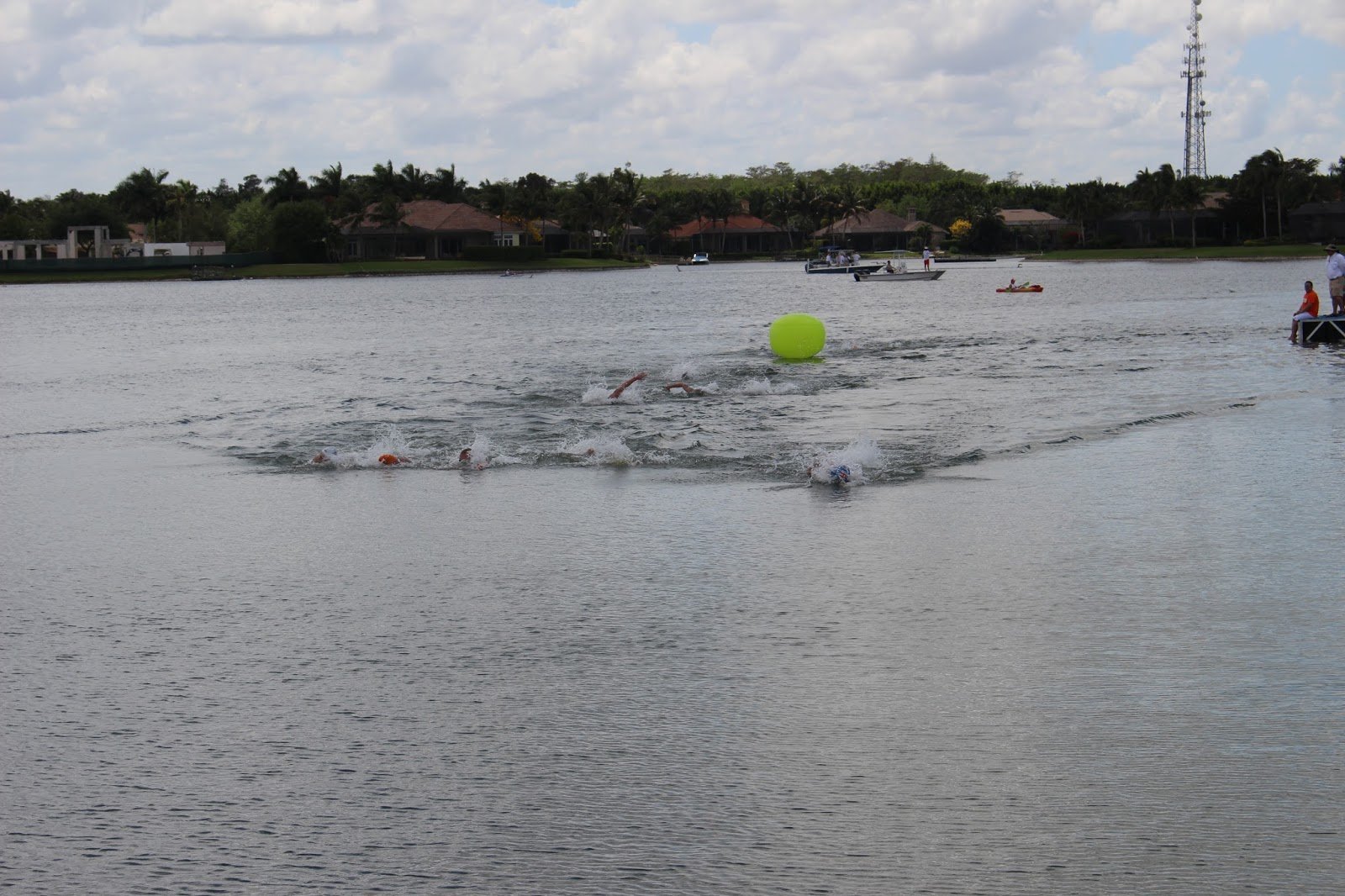 Final sprint with Andrew Gemmell swimming outside on far right 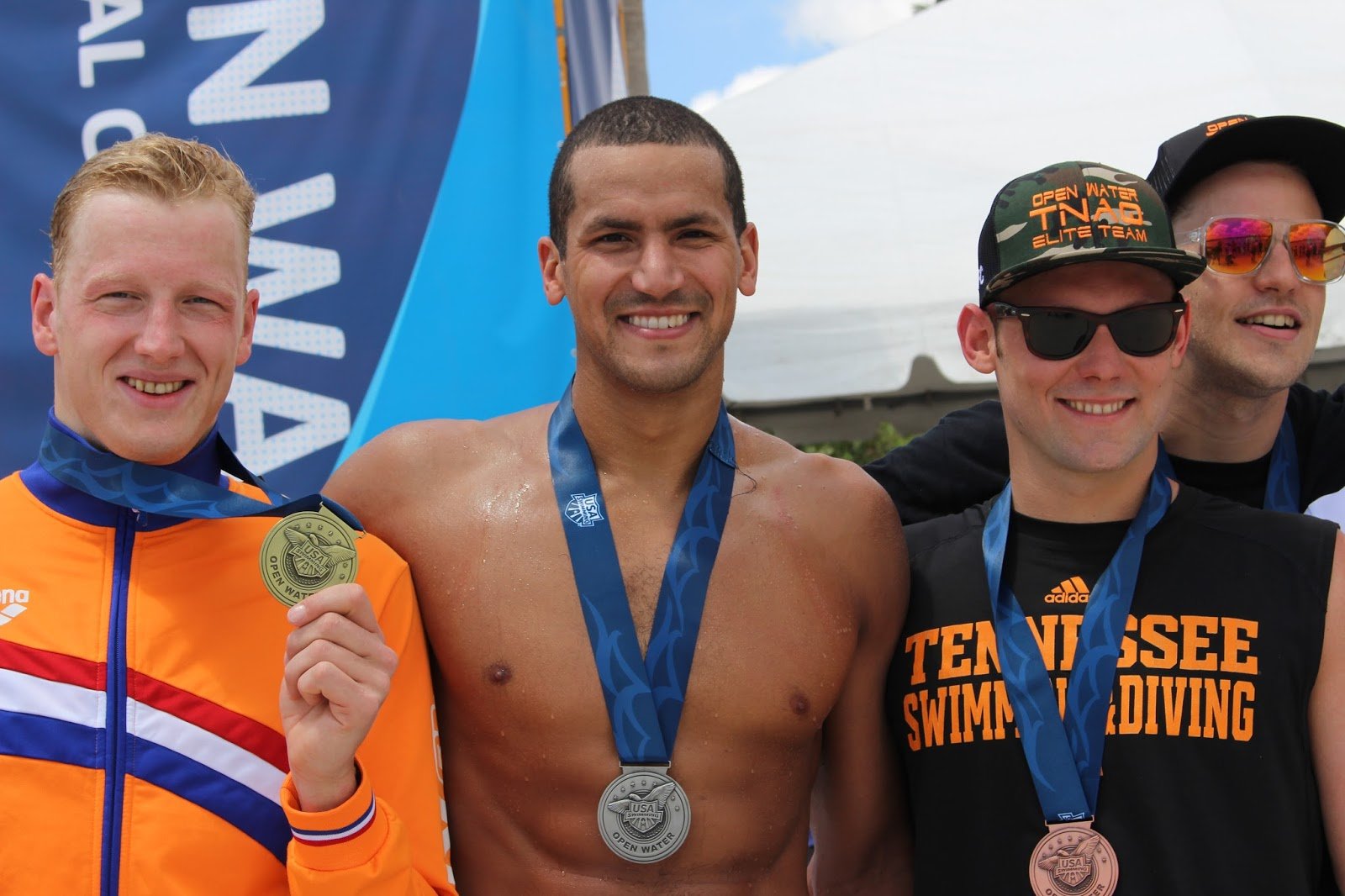 The men’s race at the 2016 USA Swimming National Open Water Swimming Championships could not possibly live up to the billing of the earlier women’s race.

It would be hard – or impossible – to out-do Ashley Twichell who out-touched Rachele Bruni of Italy on the very last stroke.

Or so everyone thought onshore and among all the coaches and swimmers from Canada, USA, Poland, France, Japan, Peru, Australia, New Zealand, Brazil, Italy, Netherlands, and Germany.

But the men did not disappoint.

The men’s race had nearly everything in an equally exciting – but thoroughly confusing – competition:

At the end even the apparent winner Andrew Gemmell – who played his race card exactly right – was initially disqualified.

By the time the waves had settled, Dutchman Ferry Weertman overcame not one, not two, but it looked like three or more rough water tussles with Tunisia’s Oussama Mellouli, France’s Marc Antoine, and Alex Meyer to finally emerge as the winner.

From our observation, the race had gone according to the proven formula of 10 km racing among the men. The pre-race favorites were scattered all over the pack, from Ous Mellouli towards the front to Sean Ryan hanging around the back. The race alternated between fast false breaks and leaders suddenly shifting gears to slow down or turn over on their back in order to willingly give up their position at the front.

With 100 meters to go and Mellouli with an ever so slight lead around the final buoy, it was still anyone’s game to win. But Mellouli was in the center of everyone’s sights.

Mellouli was surrounded by two men to his right and two men to his left, all sprinting as quickly as possible. It was all whitewater with everyone doing a 6-8 beat kick and their arms furiously churning. Then something happened. Something bad.

The field veered wildly right and then suddenly veered in response towards the left. Arms got tangled, more than once. Heads were submerged, involuntarily and perhaps purposefully. Heads popped up and the swimmers had to stop when their arms wrapped around the shoulders of their competitors.

It was Open Water MMA (mixed martial arts). It was a water polo game suddenly without referees.

No whistles were blown, no yellow cards issued and no red cards given.

Just a lot of whitewater, impending all over the place…

But Andrew Gemmell was swimming in open water on the outside and had a clear, unimpeded path to the finish with no one around him. Gemmell had – fortunately and perhaps strategically – completely missed the scrum and sprinted to victory.

Until the officials reported that Gemmell had crossed the finish line with only one transponder on his wrist. Because USA Swimming rules dictate that competitors must finish with transponders on both wrists, his victory was nullified. Shocked and disappointed, he had to accept the ruling that enabled Weertman, Mellouli and Meyer to capture the podium positions.

The race can serve as a great teaching tool for athletes, coaches and officials to understand what can go right – and what can go wrong – in the sport of open water swimming.

Update on the protest filed by Andrew Gemmell is here. Gemmell was originally judged as being disqualified, but a protest was later filed and the original ruling was reversed.

Why was Gemmell initially disqualified? Explanation on FINA rule OWS 7.2.2 is here.

Aerial images and highlights produced by Chris and Nate Lundie of Take It Live Productions.