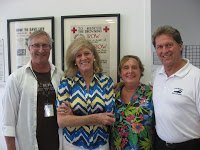 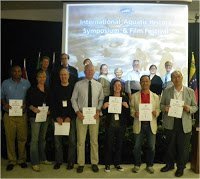 In May 9th-12th, the inaugural International Aquatic History Symposium and Film Festival (IAHSFF) was held during the International Swimming Hall of Fame weekend in Ft Lauderdale, Florida.

The participants represented a diverse and illustrious group of aquatic enthusiasts from all over the world met for 4 days of speeches, poster presentations, films, memorabilia collections and book signings from film makers, academics and water safety and aquatic advocates.

Many of the films involved activities in the open water.

During the International Film Festival, numerous aquatic films were reviewed and selected for screening. Jens Lind won the IAHSFF Best Olympic History Film award for The Sunshine Olympics 1912. Lind’s extraordinary film tells the story of the Stockholm Olympic Games which was the biggest and most successful sporting event ever at the time. Cheryl Furjanic won the IAHSFF Best Film Director award for Sync or Swim. Her film offers a candid, intimate look at the misunderstood sport of synchronized swimming that is so much more than sequins and smiles.

Deborah McDonald won the IAHSFF Best Swimming Film award for her film 50 Year Old Freshman Suzanne Heim-Bowen. Her documentary chronicles the effort to survive the grind of competition and the disadvantages of age of 50-year-old International Master’s Swimming Hall of Famer, Suzanne Heim-Bowen.

Paul Carvalho won the IAHSFF Best Synchronized Swimming Film award for his film The Mermaids’ Club, a documentary that explores the birth and early evolution of synchronized swimming in North America. Dr. Tom Griffiths won the IAHSFF Best Short Film award for his film Five Minute Scanning Strategy. His innovative film was developed after a decade of research and explains how lifeguards can stay more alert while on duty.

Dr. Stathis Avramidis won the IAHSFF Best Young Film Director award for his film Ode to (Lifesaving) Joy that pays a tribute to Lucas Bistarakis, who is known today as the Father of Hellenic lifesaving. Josh Waletzky and Jenny Levison won the IAHSFF Best Aquatic Television Trailer award for Parting the Waters, a trailer that shows how sport has the power to transform individuals, who in turn transform society. Waletzky commented, “The responses of the people that watched my film were terrific. A documentary often needs to be screened first at its core audience. With so many aquatic films currently produced, I think that this film festival can be a great destination for all of them.”

Bruce Wigo, CEO of the International Swimming Hall of Fame, summed up the Festival, “ISHOF is the world repository for aquatic history. So it is natural and maybe a little overdue that it had an international aquatic history symposium and film festival. The event has exceeded our expectations, because the quality of the presentation and films was absolutely incredible. This was a great first step in making this an incredible popular for people from all around the world.”

The coordinator Dr. Avramidis who spearheaded the project was similarly pleased, “This event was a modest very good beginning, of what we want to be a tradition and the destination for everyone involved in aquatics. I watched many films, saw many photos and read a lot of scholarly documents of the past. In all of them, I saw athletes, lifesavers and ordinary people, from all the corners of the world competing or engaged in aquatics. I saw proud faces, anticipation, glory and defeat. Most of them now belong to history. I wonder how the historian of the future will perceive us in 100 years from now. I believe that we should all be proud for participating in this inaugural event.”

The IAHSFF has published the proceedings in its 254-page IAHSFF Book, available for purchase here.