Filming From The Farallons 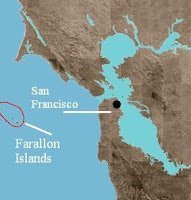 Karen Rogers swim from the Farallon Islands to Aquatic Park will be filmed by Roger Teich and Elizabeth Pepin Silva.

Teich previously filmed an equally courageous Ron Elliott who is the only sea urchin diver who works off the Farallon Islands where he shares the ocean with the Great White Sharks.

Teich’s riveting footage of Ron’s work – right where Rogers will be swimming – is below.

Silva is a prolific and award-winning filmmaker well-known for her photography in the surfing world and inspirational filmmaking of female athletes.

Rogers and Silva will undoubtedly be able to paint an incredible picture on the canvas known as the Pacific Ocean.