Filming The Olympic Marathon Swim From The Air 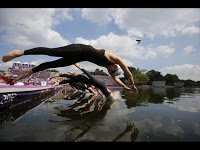 The Olympic marathon swim is being filmed from many different angles and is an improvement over the television production of open water swimming from the 2008 Beijing Olympics.

One innovation that is being used at the Serpentine is the use of the CableCam.

The CableCam is often used in land-based sports that are played in giant stadiums, but the CableCam is being utilized during the Olympics to provide great aerial footage of the swimmers.

“What you see visually in sports coverage is a constant attempt to get more intimate, to bring the viewer closer to the action,” said Ed Goren, president and executive producer of Fox Sports.

For a sport like open water swimming that is rarely the subject of television production, the CableCam certainly help bring the viewer closer to the swimmers. A gyro-stabilized high-definition camera is suspended from cables and computer-controlled winches above the water that moves with the swimmers.

While the cameras produce in-the-middle-of-the-pack views that are cool and interesting, we hope that in future productions, the CableCam shows more close-up action and slow-motion footage of the swimmers. This would give viewers and the media an even better appreciation of what the open water swimmers do.

Especially around the buoys turns.

In American football games, rules require that the cameras always be behind the play and at least 4 meters above the ground in order to not interfere with the players or play.