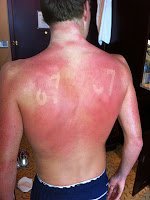 Researched by the University of Otago in New Zealand, accepted by the International Olympic Committee and International Triathlon Union, endorsed by the FINA Bureau, and voted upon by the FINA Technical Open Water Swimming Congress, the new rule is formally added to the FINA rule book.

We are hopeful that both swimmers are very careful when competing in open water races in these high temperatures. The dangers are incredibly high.

The issue is not exclusively concerning the elite athletes who are accompanied and escorted by trained officials and hoards of safety crews during FINA Open Water Swimming Grand Prix and FINA 10K Marathon Swimming World Cup races on the professional circuit. The issue is more a serious impact among the 12,000+ open water races around the world that follow the FINA regulations, rules, and mandates. At most of these events, the number of safety personnel is significantly less than at FINA competitions and the athletes are much less trained, less physically fit, and significantly older than the professional marathon swimmers on the FINA pro circuits. This is where the real danger lies.

As Bruckner Chase explains, “The early warning signs for hyperthermia are masked or hidden by the aquatic environment. Blacking out in the ocean carries far greater likelihood of dire consequences than the same scenario on land. Black out within 10 yards of an ambulance on land, and when an athlete hits the ground there was no doubt what was going on. IV’s and medics treat the athlete within seconds.”

The same is definitely not true in the open water. If there are problems in the open water, an athlete could face minutes of fellow competitors inadvertently swimming around and over the individual – or simply not be seen at all until too late. Chase asks, “Most swimmers train in a controlled pool environment. They do not have a chance to adapt and learn what to do and what their body does in the extreme. Is there adequacy of knowledge and training among athletes?”