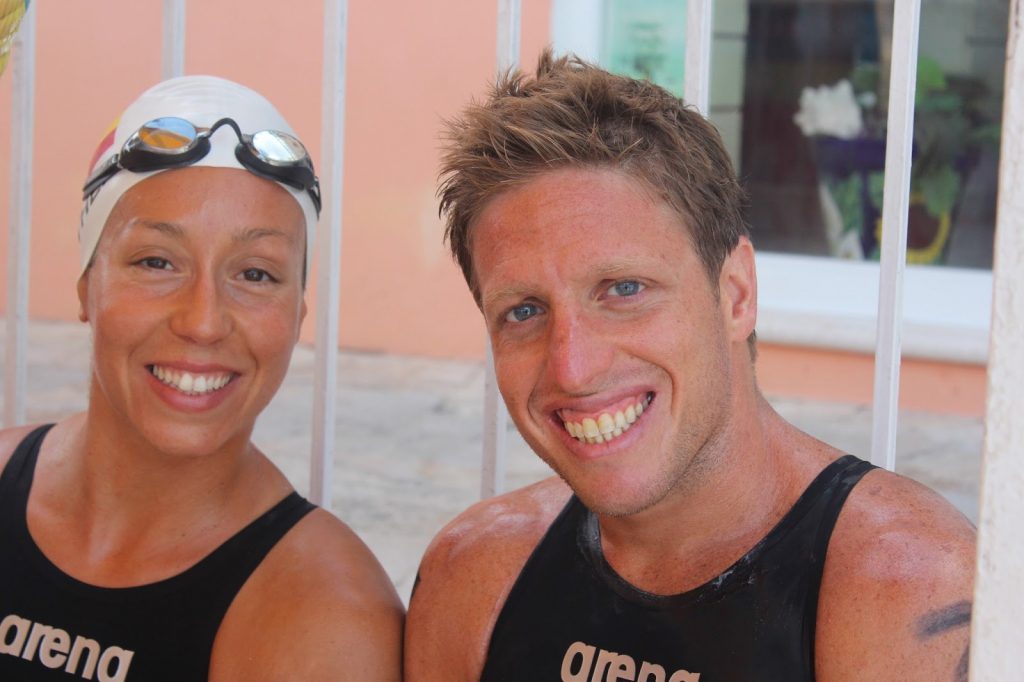 Love is in the air…and in the open water.

When two people are passionately in love, either because they are in the initial throngs of courtship or because they have spent decades together in the bands of matrimony, there are telltale signs of their emotional bonds and sincere feelings for one another.

When these two people are open water swimmers, there are even deeper and more practical examples of their mutual love.

There is also another level of mutual, even deeper understanding between two individuals when the partners are husband and wife and they both swim and/or coach. Over the decades, these open water duos included Valerie and Roger Parsons, Audrey and Ray Scott, Chris and Penny Palfrey, Damian Blaum and Esther Nuñez (shown above), Nikolai Evseev and Angela Maurer, Laura and Michael Miller, Charlie and Sally Anne Minty-Gravett, Diego Tricarico and Pilar Geijo, Michelle Evans-Chase and Bruckner Chase, Patty and Dr. Jim Miller, Nadine and Christian Reichert, Edith van Dijk and Hans van Goor, and Poliana Okimoto and Ricardo Cintra.

These individuals are completely in tune with their partner’s mindset and lifestyle. They often share the same travel plans, training schedule, competitive nature, nutritional philosophy, and sleeping habits. In the open water, they observe, share, and endure so much physically, mentally and emotionally. They develop profoundly strong bonds and similar goals, often sharing the same thoughts and mindset before, during, and after a dip in the open water.

Love is in the air…and in the open water.