Finishing Can Be Cruel…But Enlightening 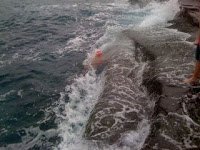 Outside Kyoto, there is a 46,000-kilometer undertaking where selected Japanese monks must walk, meditation and pray in the Kaihōgyō ritual for 1,000 days.

Their road to enlightenment and process of self-denial requires requires incredible stamina and discipline over a seven-year period.

The ritual is mind-bogglingly difficult with extraordinary expectations of endurance.

During the fifth year, their ritual is temporarily put on hold for them to go for 9 days (216 straight hours) without food, water or sleep of any kind. The monk sits in the temple and prays constantly with two monks on either side to ensure he does not fall asleep. At 2 am every night, the monk must get up and walk 200 meters to offer sacrificial water from a well.

According to medical theory, these men should be dead in this daring, daunting ordeal at extreme asceticism. But they face their physical limitations and desires with a serenity, courage and commitment that only 46 men have accomplished since the 16th century.

What is inspirational about this ritual is that during their nine days of non-sleep, non-eating and non-drinking, they must walk 200 meters to the well every morning. On the first night, the 200-meter walk is done in a matter of a few minutes. By the ninth day, the same 200-meter walk takes an agonizing hour due to the physical toll on the human body. And, then on the very last moment before the ritual is completed, the monk walks to his first meal and drink in 9 days…but they must first kneel in front of the food and water and pray.

The amount of self-discipline and courage to sit in front of food and water and first pray after 9 days in a principled, quiet and scripted manner is an unbelievable culmination to this ritual.

In an aquatic analogy of the culmination of the Tendai monk’s 9-day ordeal, Stephen Redmond battled with the Molokai Channel for nearly 22 hours 30 minutes. Then, he faced the finish of his swim – against the volcanic rock cliffs at China Walls on Oahu. Like the monks of Tendai, his culmination of his Oceans Seven challenge required a principled, quiet, scripted effort.

He explains, “Skipper Ivan Shigaki directed me to swim with the tide towards a point around [Hanauma Bay] two miles away. I followed the boat all the way to China Walls where a large group of people who had been following the swim had gathered to see the finish included my wife Ann and the Hawaii channel swimmer Linda Kaiser.” China Walls is a well-known surf point where experienced surfers caress down waves that crash spectacularly against a sheer rock cropping. Even those in good shape and with plenty of energy must time their exit out of the water with precise timing and skill. How Stephen did the same 8 days after his Cook Strait swim and after more than 22 hours in the Molokai Channel was, frankly, monk-like.

The sheer mental discipline of facing this rock wall in such a depleted physical state was a testament to Stephen’s strength and force of will – and his knowledge that an unsuccessful finish would invalidate his efforts. He was not going disappoint himself or everyone else who had been supporting him along the way.

“I approached the wall and asked, ‘How was I to finish the swim?’ I was told I needed to come right up out the water on the [rock] ledge. I attempted this three times without success. Finally, I got it right with my complete body out of the water for the finish. I asked if was this OK [in front of] 20 witnesses and swam back to the boat.”

While Stephen was intent of completing the swim by “clearing the water”, the rule in the (English) Channel Swimming & Piloting Federation dictates that a finish can be where there is “no seawater beyond” according to 34-time English Channel swimmer and Hall of Famer Kevin Murphy. He quotes the English Channel rules, “For a swim to be officially recognised, the swimmer must enter into the sea from the shore of departure, swim across the English Channel (i) to finish on dry land, or (ii) to touch steep cliffs of the opposite coast with no sea-water beyond. Swimmers may finish in harbour water provided they land as in (i).”

In other words, Stephen could have finished by simply touching the rocks at China Walls if he had been swimming under English Channel rules of the Channel Swimming & Piloting Federation. Kevin explains, “If I’m observing, I always emphasise that if a swimmer can’t walk on to dry land, they can touch a rock or cliff where there is no ‘no seawater beyond’.” That would have counted with Stephen’s finish at China Walls, which was well beyond the traditional finish at Sandy Beach or Hanauma Bay.

“Common sense prevails. If a sea wall is a structure which sticks out from the land, there is seawater beyond so that’s not the finish. If it is a wall which is at the point where land finishes and water starts and there’s no water beyond, then that’s the finish.”

Kevin talks about his own experience…and that of the originator of channel swimming, Captain Matthew Webb. “There is a picture of me after my first two-way [English] Channel swim, perched on a ledge half way up the sea-wall at The Lees, Folkestone. That was my choice. All I actually needed to do was touch the wall. As far as I know, all the pictures of Captain Webb finishing show him nearly waist high in water.”

Like the Japanese monks in Mount Hiei facing a 9-day ritual (see below) or Stephen Redmond in the Molokai Channel who cleared the water at the end of his day-and-night long ordeal (see above approaching China Walls), it is always inspirational to observe another human whose clarity of purpose, serenity and, indeed, enlightenment at the end of their efforts results in a successful culmination.