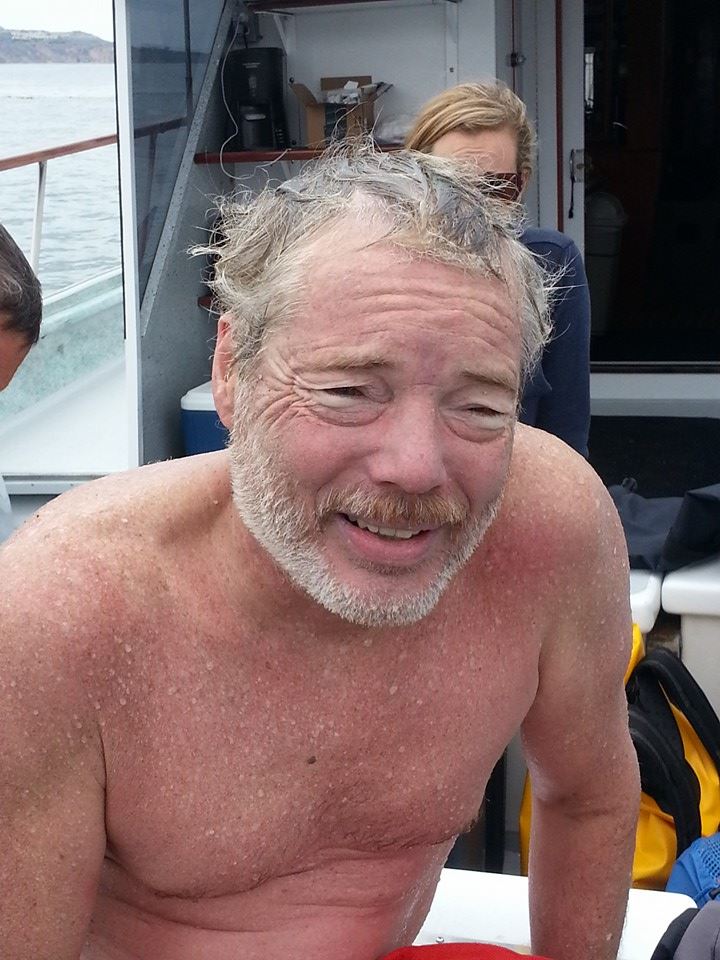 It took 6 hours to boat out to San Nicholas Island, out where the Wild Wild West really begins.

McCarley and team has planned to boat out to the uninhibited island and swim 28 miles to Santa Barbara Island in an unprecedented channel crossing between a pair of Channel Islands. Boat out, swim across, get out, and back to shore. Simple plans, so difficult to execute so far from shore in the Pacific Ocean where unpredictability is predictable.

Just short of three hours from the San Nicholas shore, Triple Crowner McCarley had had his day in the sun.

He described it a failure and “not even a good workout. I could not get my eyes to focus – everything was spinning.”

While disappointment was the first natural impression, McCarley’s attempt was successful looking from other perspectives.

Scott Zornig, president of the Santa Barbara Channel Swimming Association that governed the swim, said, “Every marathon swimmer misses their goal at least once during their career. Anthony is to be applauded for having the courage to attempt something that no person ever has done before. He will be back.”

“He built a great team and a supportive following that stretches from [America’s] coast to coast,” added Steven Munatones. “He forged a relationship with the U.S. Navy that can be built upon in the future. Plus he showed the offshore channel communicate what is possible. This first attempt and Anthony’s planning may simply be a precursor to his future success – or someone else’s.

While people always remember Matthew Webb in English Channel lore, if it were not for J.B. Johnson‘s attempt in 1872, Captain Webb may have never tried the Channel. Both he and his crew helped set the stage – and that is extraordinarily important in a sport that moves beyond – sometimes way beyond – the shoreline.

Plus if everyone were always successful in all their swims, there would be less joy of walking onshore. He will swim (for) another day

Rory O’Connor of the Tampa Bay Frogman Swim reminded McCarley that President Teddy Roosevelt put it best. “It is not the critic who counts; not the man who points out how the strong man stumbles, or where the doer of deeds could have done them better. The credit belongs to the man who is actually in the arena, whose face is marred by dust and sweat and blood; who strives valiantly; who errs, who comes short again and again, because there is no effort without error and shortcoming; but who does actually strive to do the deeds; who knows great enthusiasms, the great devotions; who spends himself in a worthy cause; who at the best knows in the end the triumph of high achievement, and who at the worst, if he fails, at least fails while daring greatly, so that his place shall never be with those cold and timid souls who neither know victory nor defeat.”

Photo of Anthony McCarley after his Catalina Channel crossing where he achieved the Triple Crown of Open Water Swimming.