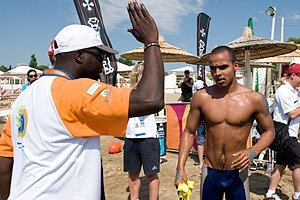 Along with United States First Lady Michelle Obama and entertainer Stevie Wonder, ESPN will broadcast the Opening and Closing Ceremonies of the World Summer Games that will include a POW (Pool Open Water) exhibition and a 1.5 km open water competition in Long Beach’s Alamitos Bay.

Andrew Smilley of the Cayman Islands, who will be featured by the Disney-owned ESPN, is expected to defend his open water swimming title in Long Beach – and he will be one of over 7,000 athletes from 177 countries in participation.